This is the state we're in 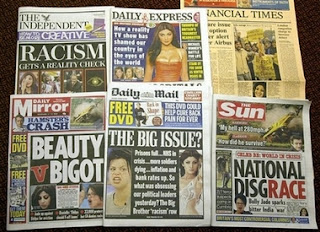 Last Friday I experienced a serious urge to do something I had never done before. No, no, settle down, it was not that exciting. I decided that I would quite like to vote for Jade Goody on Celebrity Big Brother. Unfortunately, neither I nor the people I discussed it with (who agreed with me) knew how to go about it. So, we did not vote.

For the benefit of our non-British readers and those who are too superior to admit interest (though they admit to a great deal of disgust) in the Big Brother developments, let me explain what has been happening. (Those who are disgusted at the thought of such lowly subjects and people being discussed on this elevated forum can stop reading now.)

There is no need, I believe, to explain what Big Brother or Celebrity Big Brother are, there being similar programmes in most countries of the developed world. The participants in the latter tend to be rather moth-eaten celebs, either wannabes or ones way past their sell-by date. (There was one occasion when the winning celebrity was not one at all. She had merely pretended and nobody noticed the difference.)

So, there we were, a couple of weeks ago, with a number of moth-eaten celebrities gathering in the house, among them one Jade Goody, who is famous for being the only Big Brother participant who had made it as a celeb, her mother and boyfriend and assorted others, including a Bollywood wannabe, who had made a number of unsuccessful films and was clearly looking to this programme to do something about her career.

So what happened then, I hear you ask? Well, here is the entire rant.