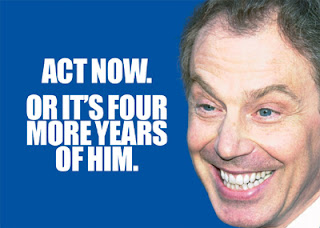 During a closely fought general election, The Sunday Telegraph tells us, "those of a Conservative disposition will need to stick together if Gordon Brown is not to win by default."

This is in a leader headed, The fatal fringe, which is backed up by the Boy King-groupie-in-chief, Matthew d’Ancona, who complains bitterly that "there are Tories who would rather lose than change". And thus is the newspaper recording the Tories waking up to the threat of the minnows and the Boy King’s latest attempt to plug the leaks in the dyke.

Significantly, the line exactly matches that of Gerald Howarth whose views we published on this blog yesterday and who warns us that a victory for Gordon Brown "will be assured unless people get behind the Tory party and rally to our flag".

How interesting it is that these sophisticates - who understand the political process so well - simply do not get it: we, the electorate, as my colleague is so fond of saying, owe you politicians nothing. If you want our vote, you are going to have to earn it. The message "vote for us or Gordon Brown will get in" is not enough - not anything like enough.

It didn't work last time (pictured) - and it isn't going to work this time. To think otherwise is a fatal arrogance that is going to lose you the election.