"I know who my comrades are" 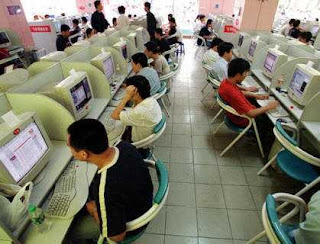 Emily Parker writes in Saturday's Wall Street Journal about the Chinese internet and the government's attempts to control it with President Hu Jintao asking his officials that they "actively and creatively nurture a healthy online culture".

Ms Parker points out that there will soon be 137 million internet users in mainland China, not, perhaps, a particularly large figure, given the population of that country, but no longer a tiny group either. Of course, we cannot tell how many of them use the internet simply to play games but a large proportion must read and write on various subjects. Even personal blogs become a political tool under a Communist regime.

She speculates about whether the internet and its use are likely to promote freedom and democracy in that country and the article is worth reading in full. Her conclusion seems to be that sometimes it goes up and sometimes it goes down.

The Chinese government has installed fairly effective firewalls, employs tens of thousands of internet police and is effective at closing down websites or removing postings before too many people can read it. There is also a tendency to arrest journalists or bloggers who write too many uncomfortable pieces.

Western firms who move in on the market are required to censor themselves and Yahoo even handed over the name of a journalist, who was promptly imprisoned.

Above all, the Chinese government fears uncontrolled assembly of people. We are not speaking only about tanks in Tiananmen Square but also about the inexplicably fierce crack-down on the Falun Gong, whose main crime seemed to be to bring together many thousands from all over China to Beijing in a quiet protest.

If you cannot gather or find people who share your views in the largest possible way, physically, then this may be possible on the net.

More important, though, is that for those Chinese who long harbored suspicions that their views were out of sync with the Communist Party line, the Internet created a space to learn that they were not alone. Or as I remember one intrepid, Beijing-based Internet essayist explaining to me - Now, I know who my comrades are. In his online world, there were vibrant discussions, "opinion leaders," and various intellectual camps. Peering into this universe would even lead one to imagine the root formation of political parties.

Perhaps. One can go on hoping. But even knowing who your comrades are is important for the Chinese who want to think for themselves.