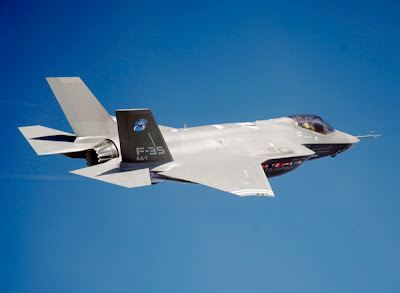 In Washington yesterday, Turkey signed on for the next phase of the Joint Strike Fighter (JSF), pledging $175 million toward the aircraft's production and promising to buy 100 of the conventional-take-off-and-landing version (F-35A) of the aircraft, worth about $10 billion.

This follows the decision in October last when Turkey's Air Force decided to go for the Lightning II, dashing any hopes of the "colleagues" that the Eurofighter might be chosen.

Back in October though, only the Air Force, as the user, had made the decision - which had to be ratified by the government. It now has been. In the Pentagon yesterday US deputy defense secretary Gordon England met with Turkey's national defense minister Mehmet Vecdi Gonul and undersecretary for defense industries Murad Bayar, where they signed a memorandum of understanding, cementing the deal.

Of course, this is much, much more than an aircraft deal, as indicated by England's remarks prior to the signing. He said he had spent several years cultivating US relations with Turkey and called the Turkish officials present "dear, close friends," adding, "Our country is privileged to have such a strong and dynamic ally in Turkey … Together our two nations are standing together in the name of freedom."

This continued Turkish participation, says the US Department of Defense, reinforces the longstanding and close relationship between the US and Turkish Air Forces, "providing a solid foundation for future air operations with other allied and friendly nations in a joint and coalition environment."

But it also signals, if not a cooling in the relationship between Turkey and the EU, then certainly the reluctance to get too far into bed with the Europeans, especially in such a vital area as defence. The message will undoubtedly be received and understood in Brussels, both in the EU commission headquarters and in Nato.