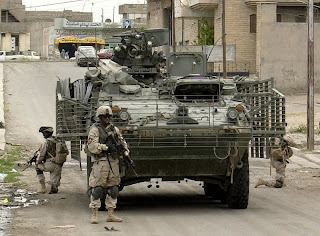 The London Times not only seems to think the surge is a done deal, it reckons the US Army is going to copy British tactics in order to win the war.

According to the newspaper, this is what the new US ground commander intends to do, a certain General Petraeus, commander of the 101st Airborne Division in Iraq in 2003.

He, we are told, is largely credited with being one of the only US officers who succeeded in bringing order to his region of Iraq by establishing "a British colonial model of civil-military interaction."

Says the Times, in Mosul he entered an area with 110,000 former Iraqi Army soldiers and 20,000 Kurdish militiamen. But unlike the tactics in much of Iraq, General Petraeus took pride in conducting raids with minimum violence.

In Mosul, also – as far as we understand it, the US deployed its now famous Stryker Brigades, adopting novel and highly successful tactics, immortalised by Michael Yon.

Methinks it was these tactics, rather than any emulation of the British that has made the different. Or am I off the wall, and does The Times have a point?

Email ThisBlogThis!Share to TwitterShare to FacebookShare to Pinterest
Labels: iraq