Writing themselves out of the script 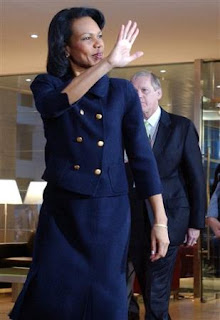 To deal with the expected spring offensive in Afghanistan, the United States is to increase the number of its troops in the country by 3,500 – initially by extending the deployment of the 10th Mountain Division by four months.

With other adjustments to deployment cycles, the US will be fielding over the longer term an extra 2,500 troops, providing more than half of the troop contingent in the country, which wiil rise to 34,500.

To speed up stabilisation, the US government is also to ask Congress to commit an extra $10.6 billion in aid, $8.6 billion (£4.4 billion) to train and equip the Afghan army and police, and $2 billion for reconstruction projects.

Meanwhile, US secretary of state Condoleezza Rice is in Brussels, addressing NATO, telling member states that they too must raise their game if the Taliban is to be defeated. However, there are few signs that her call will be heeded. Certainly, no commitment to providing extra troops in expected to emerge from today's talks.

And does this not speak volumes for the "colleagues"? All but the most ardent anti-war campaigners will agree that the Afghan is worth fighting for, yet the "colleagues" are silent when it comes to stepping up to the plate. Neverthless, no effort is spared on the fruitless pursuit of an EU constitution, all in the name of a more powerful "Europe".

Peoples and nations are judged by their deeds not their words. By that measure, the "Europeans" are showing that, when push comes to shove, the "project" is just empty rhetoric. They are writing themselves out of the script.