More on the UKIP peers 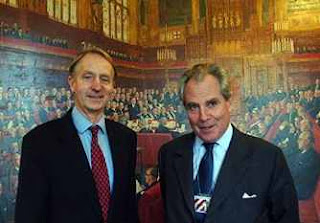 In the latest issue of eurofacts Lord Pearson or Rannoch and Lord Willoughby de Broke, of whose decision to abandon the Conservative Party in favour of UKIP we have written before, have published their political statement. Together with the editor of eurofacts we have decided to reproduce it here in full, as we think our readers would be interested, though some have, undoubtedly, seen it before.

Why we left the Tory Party to join UKIP

Leaving a political party to which one has belonged for many years – even one with which one has come to disagree profoundly on the central political issue of the day – is a painful process. After much reflection we finally decided to do so because we have lost all hope that under its present leadership, the Conservative Party will adopt a sufficiently Euro-sceptic policy in time for the next General Election. We have joined UKIP because in our view it is the only party telling the British people the alarming truth about our relationship with the European Union:

· That the majority of our national law is now made in Brussels.
· That is law is proposed in secret by the unelected EU bureaucracy, the Commission. It is then negotiated in secret by the Committee Of Permanent Representatives form the Nation States (COREPER) and decided in secret by the Council of Ministers, where the UK is reduced to some 8 per cent of voting power. The resulting laws are then executed by the Commission having been confirmed, if necessary, by the Europhile EU Parliament and Luxembourg Court. The House of Commons and the House of Lord are irrelevant in this process.
· That our representative Parliamentary democracy has therefore become largely redundant; we have lost the power to govern ourselves. The central privilege of that democracy, for which millions have died over hundreds of years, is that the British people should have the right to elect and dismiss those who make their laws. This has been betrayed by our membership of the EU.
· That only some 10 per cent of our economy trades with the singe market. Another 10 per cent trades with the rest of the world, and 80 per cent stays right here in our domestic economy. Yet the diktats from Brussels afflict 100 per cent of our economy. And we would not lose our European trade if we left the political construct of the EU because they sell us more than we sell them. We are in fact their largest client.
· That leaving the European Union would free us from its stifling regulation and would therefore be hugely advantageous to our economy; it would create many jobs, adding substantially to our GDP. It is thus a positive, enriching and thoroughly modern thing for us to do in this globalised world. It is a policy for a better future.
· That the proposed European Constitution is going ahead fast in Brussels, despite the veto cast by the French and Dutch people in June 2005. The Eurocrats are illegally using clauses in the existing Treaties, (particularly Article 308 which allows the Community to act only “in furtherance of the operation of the Common Market” – i.e. the Free Trade Area established by the Treaty of Rome, and voted for by the British people in the Referendum of 1975) to drive ahead the Charter of Fundamental Rights, a vast EU human rights law, most of which was contained in the failed Constitution.
· That some of the initiative being pursued in Brussels will be difficult to reverse, for instance our military procurement, which is being surreptitiously aligned with EU ambitions, to the detriment of our long-term relationship with the United States and the Commonwealth.

So we also join UKIP with enthusiasm, in the hope that together we can help the British People to wake up to their predicament, and to react accordingly.