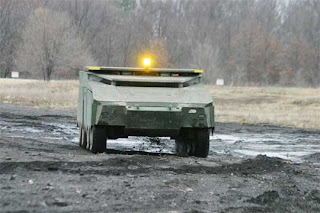 As with a woman preaching and a dog walking on his hind legs – so it is with discussing FRES. It is not done well – to misquote Samuel Johnson - but you are surprised to find it done at all.

So, we give one small cheer to The Sunday Times which today runs an article on the Future Rapid Effects System. But it does have to be a very small cheer indeed because it is not done at all well.

Written by Peter Almond, a journalist we have met before, the piece is headed, in a wholly misleading fashion, "Army faces 5-year wait for armoured carriers", betraying the profound ignorance of the media on this subject – an ignorance shared by many others.

Quite how ignorant is immediately apparent from Almond's opening which makes such a huge sweeping statement that it makes one cringe, writing as he does: "the army's plans for a new generation of armoured troop and missile carriers costing £14 billion face new delays of at least five years, undermining its ability to fight land battles overseas."

The assumption, of course, is that FRES will actually enhance the Army's ability to fight land battles overseas, which is far from the case. In fact, as we have argued, FRES could actually be a wrong turning, saddling with the Army with extremely expensive high-tech equipment that is not fit for purpose – a purpose that nobody has bothered to define.

Therein lies the real story but, as always, we see these gifted and no doubt highly paid hacks miss the real story and go running after hares. In Almond's dim little world, the story is thus how the proposed 3,000 combat vehicles which form the core of the land component of FRES "will not enter service until at least 2017", five years later than the Ministry of Defence (MoD) forecast, potentially embarrassing the government.

Almond then tells us that General Sir Michael Jackson had told troops in 2003 that they would only have to wait until 2009 for the vehicles, an assurance given "to soften the blow from the previous round of cuts when many historic regiments were abolished."

What a stupid statement that is, going well beyond mere ignorance. The "historic regiments" were abolished to make way for FRES, you idiot, so how could assurances on the timing of FRES "soften the blow"?

The perversity of it all though is that, in his own account, Almond has the making of the real story – one that links directly back to the debate which Blair is seeking, on the nature and rôle of the Armed Forces.

In that context, he - Almond - tells us that the delay has been caused by a reassessment of what the Army will need, caused by experience in Iraq and Afghanistan. The original plan had been to provide a lightweight fleet of vehicles that could quickly be flown to troublespots. But the experience of roadside bombs and rockets has highlighted the need for heavier armour.

Furthermore, writes Almond, senior planners say that with so much money and attention being devoted to operations in Iraq and Afghanistan the government's blueprint to transform the armed forces into a nimble "expeditionary" structure is coming unstuck. He then cites a cites senior planner saying,

The whole concept of the 1998 strategic defence review was to push for forces to rush out to trouble zones, restore order and return … Instead, we're stuck in Iraq and Afghanistan.

But that is the crucial point – FRES is designed for the "wham, bam, thank you mam!" type of expeditionary warfare exemplified in the European Rapid Reaction Force (ERRF) concept – a quick in and out, with plenty of fireworks in between. The real world, however, is the warfare in which our troops are engaged in Iraq and Afghanistan and, if that represents the future, we do not need FRES at all. In fact, FRES would be a dangerous diversion of funds. If we spend £14 billion on this, we are unlikely to have the money to spend on equipping the Army for the real wars.

You can now see why, though, the Army wants to get rid of Iraq and – to a lesser extent – Afghanistan. If our soldiers keep having to fight real wars, the generals may not get their new toys. Yet, the Almonds of this world fall for the propaganda - not giving the generals those toys would undermine the ability of the Army to fight land battles overseas... yeah, right!

And the Tories' line on this is?