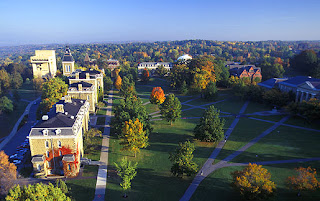 At first sight, therefore, it does not strike one as a poverty-stricken institute deserving of the charity of debt-laden European taxpayers.

However, that does not seem to be the view of the EU Commission which perhaps has a different agenda - like propaganda. To that effect, it is funding the University's Institute of European Studies (IES) to the tune of $100,000. And, it looks like it is getting a bargain.

The grant, we are told, is being awarded to the University "in honour of the EU's 50th anniversary" (honest, I am not making this up). Some of it goes to a "town twinning" project with Elios Proni in Greece Unite, part of a "Getting to Know Europe" local outreach project. But the IES also plans to conduct "The EU and U" business seminars, which will aim to "educate local businesses and small value-added enterprises about opportunities to do business with the countries of the EU".

Additionally, part of the EU grant will be used to fund IES's comprehensive "K-12 outreach program", which is designed to "inspire local students to understand and appreciate the European Union."

Of this, the "EU Curriculum Grant Contest" is one of the noteworthy initiatives. For its money, the IES will encourage teachers from Upstate New York schools to develop curriculum materials focusing on the politics, the history and the culture of the European Union.

Selected educators will be awarded $1,125 to implement the most promising programs and plans are in hand to run a "Europe Day Poster Contest" which will let youngsters explore their artistic talents while drawing upon the theme of the recently unveiled European Anniversary logo, "Together". And, of course, winners will be announced during the Europe Day 2007 celebration on 9th May.

David Wippman, vice provost for International Relations, said that the grant will "provide an excellent opportunity to advance the outreach and international mission of Cornell University by enlightening local residents about the important work of the EU, the rich cultural history of Europe and the abundant US-EU business and investment opportunities."

Well, they certainly bought him cheap. And for a "mere" $100,000, it seems Cornell University - reputedly the third richest in the USA - has been bought and paid-for as an organ of EU propaganda. One suspects the EU Commission is rubbing its hands with glee at obtaining so many cut-price Yanks.

You would have thought, though, that if Cornell academics were intent on selling themselves to a foreign power, the interests of which are inimical to those of the United States, they would have charged a little more.