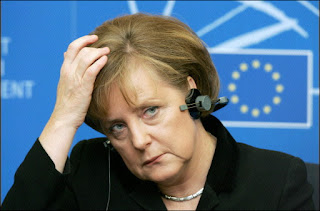 It's back again – that "God" question. Angela Merkel, we are told, has renewed criticism that the EU constitution does not explicitly refer to Europe's Christian roots, with a reference to God or Christianity.

This is according to an interview today, published in the German news weekly Focus. She talks with German cardinal Karl Lehmann, telling him that she "…would have liked to have seen a clearer declaration on the Christian roots (of Europe) … No one doubts that they significantly shape our life, our society."

You really do have to admire the tenacity of these people – if nothing else. Back in early 2004 when this blog was but a mere pup, God and the constitution was on the agenda then.

At the time, we though that this was primarily a ploy to exclude Turkey from the EU, or make it feel unwelcome – in the hope that this Muslim country would be dissuaded from joining.

The probably remains the case today, although Merkel has the sense to dress it up as an expression for her concern for the survival of Christianity. "I wonder, can we maintain the formative aspects of Christianity for day-to-day politics if the political sphere does not stand by them?" she ruminates.

Politics and religion, of course, is a dangerous mix but, when an idea is floated in the European Union, it does seen that you simply cannot say no. Like a recalcitrant child refusing to eat its breakfast being re-presented with the same meal again and again, the people of Europe, it seems, are to have God thrust into their lives – and a Christian God at that - whether they like it or not.