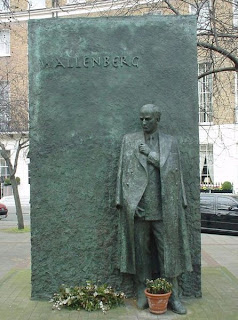 I suspect that the name of Raoul Wallenberg will not mean much to most of our readers and a great deal to a few. If there was one undoubted hero of the Second World War in Europe, it is the Swedish diplomat.

Wallenberg was from a distinguished Swedish family with a degree in architecture and experience in banking.

On July 9, 1944 he was appointed to be secretary to the Swedish Legation in Budapest, where the rather belated Hungarian holocaust was in full swing. (It was belated because Admiral Horthy, while introducing some discriminatory laws against Jews, had not allowed deportations or mass murders. It was not till the German occupation of Hungary in the teeth of his protests, in March 1944 and the take-over by the local Nazis, the Nyilas party that the local Holocaust of Jews and Roma became possible.)

Wallenberg used his position to issue Swedish protective documents, the famous Schutz-passen to numerous Jews. As it happens, these documents were not legally valid but were accepted by Hungarian and German authorities and their holders were allowed to go unmolested.

Jewish refugees, particularly children, were sheltered by Wallenberg in various official Swedish buildings and he is credited with saving many thousands, though one suspects, that some of the higher figures are an exaggeration.

Wallenberg was not the only one to save Jewish children in Hungary. There were several Lutheran Pastors who established children’s homes and colonies. All of them had to go into exile in 1947 – 48 as the Communists took over.

Wallenberg’s fate is more tragic. On January 17, 1945 as the Soviet Army fought its way through Budapest, he was arrested on presumed suspicion of being an American spy. There has never been the slightest evidence for anything of the kind, though, to my certain knowledge some Western historians have tried hard to support this theory.

Another theory, which I heard as a teenager, was that Wallenberg had started collecting information about the treatment of Hungarian civilians, particularly women, by the Soviet soldiers and, more to the point, the Soviet secret police as it followed the Red Army.

Be that as it may, Wallenberg disappeared together with his driver, taken first to the Lubyanka then to the much feared Lefortovo prison. There were supposed sightings of the man later on in various prisons and labour camps but none substantiated. The Soviets announced in 1957 that Wallenberg had died ten years before.

It is one of the more disgraceful aspects of Western kow-towing to the Soviet Union in the immediate post-War years that greater pressure was not put on the Soviet authorities for the release of this heroic man who had stared down Adolf Eichmann and Gerhard Schmidthuber.