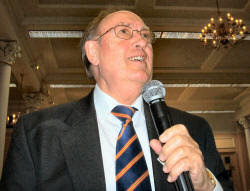 How the Independent must have loved posting this headline: "Gypsy-haters, holocaust-deniers, xenophobes, homophobes, anti-semites: the EU's new political force."

This, as written by Stephen Castle, the paper's EU correspondent, records
"Europe's far-right, xenophobic and extremist parties" crossing a new threshold yesterday, winning more speaking time, money, and political influence in the European Parliament than ever before.

Claiming the backing of 23 million Europeans, ultra-nationalists secured enough MEPs to make a formal political grouping in the EU Parliament, surmounting the hurdle that requires 20 MEPs from at least six member states, all sharing a general political philosophy.

Called the Identity, Tradition and Sovereignty (ITS) group, this has been made possible by the admission of Romania and Bulgaria in January. Their "far-right" MEPs have joined together with "hardline nationalists and extremists" from France, Austria and Italy, plus one from the UK, former UKIP MEP Ashley Mote, now sitting as an independent.

Mote, therefore, is being held partly responsible by The Times for helping this far-right groups to get funding, a cool €1 million each year for "administrative expenses". 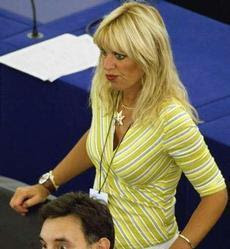 In their haste to declaim this new group, however, none of the media seem to have realised that, in branding it "far right" and "extremist" - a position led by the BBC - they can no longer so easily tar the UK Independence Party with the same brush. Unwittingly, they have positioned UKIP – and its agenda of leaving the EU – that bit closer to the "moderate" centre.

Although having been expelled from it, Ashley Mote has in fact done a far greater service to his former Party than he could have, had he remained in it.