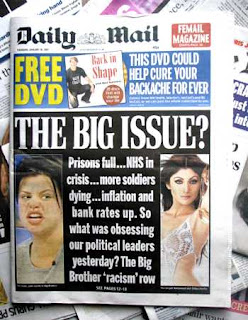 The front page of The Daily Mail today rightly complains about the politicians getting diverted onto the ultimate in trivia, a discussion on a certain television programme, thereby giving itself an excuse to devote its front page to just that issue.

It was the same show to which The Daily Telegraph print edition devoted a full page , complete with three photographs and a headline to a commentary piece which reads: "Repellent, crass and trivial: now this show has even become significant."

However, if you want something "repellent, crass and trivial", all you need to do is turn to page 18 of the print edition of the newspaper. 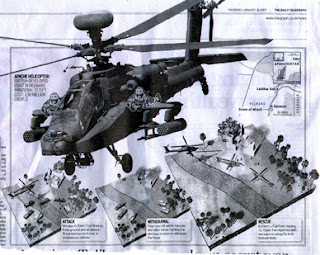 It is there that you will find an unbelievably amateur graphic to illustrate Monday's action of the Royal Marines "clinging" to Apache helicopters in an attempt to rescue their colleague. The picture shows two cartoon-esque overlays of soldiers lying on the top of the Apache wings as the manner in which they were supposedly conveyed to their rescue drama. The trouble is that it is fiction - total, absolute fiction.

For sure, the fiction was actually originated by the MoD itself which, in its own press release claimed that "four troops were strapped to the small side 'wings' of two Apaches, two to each helicopter." Interestingly, the MoD held the account off its website until the media had been able to chew it over. 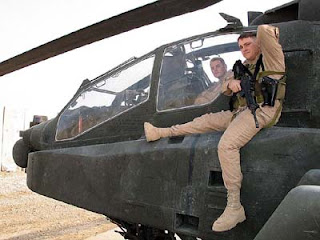 However, no sooner had the media conveyed the MoD's claim and we put it up on our site than we began to look at the practicalities of this claim. It took very little time indeed to find out how it was done, that this was a recognised procedure to allow what is known as "self extraction", the rescue of downed crews by an Apache in an emergency.

The procedures has been carried out before, in the heat of action, at least twice, in April 2002 in Afghanistan and again, in Iraq, November 2004, the latter report complete with a photograph of how it was done (above left). 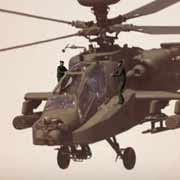 Should there be any doubt - making up for its original, inaccurate report (which is still up on the website), actually demonstrated the procedure yesterday, at its airbase in Middle Wallop, a film of which was shown by Channel 4 News. So, once again we confront the amateurism and idleness of the Telegraph which has devoted so much space to a fictional account of events. And nor was it alone: Sky News managed an equally ridiculous graphic, which it put up on its own website.

Wearily we find ourselves again repeating that, if you cannot trust the media on the small details, how can you trust them on anything. There is no magic filter that allows small-scale error but somehow ensures that other issues are treated with scrupulous accuracy. Accuracy and attention to detail is as much an attitude - a frame of mind.

More importantly, though, the space given to the graphic and the accompanying story (which was not found in the online edition), completely missed the point, the one which we so obviously asked in our own piece - why were there no proper troop-carrying assault helicopters to convey troops in what was a pre-planned attack? 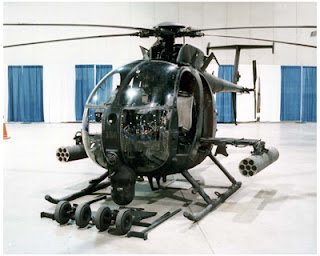 Once again, it takes a letter writer to the newspaper, Mr Philip McLaughlin, of Ormskirk, Lancs, to remark that the episode showed that "our troops are still desperately short of sufficient resources in Afghanistan, especially helicopters." Mr McLaughlin, who has a son serving in the Royal Marines in Afghanistan, asks, "Why were there no suitable helicopters available for evacuation or reinforcement?"

To give it its due, for once, that issue has been picked up with a vengeance by the unofficial Army forum, which has been hosting a serious debate about the use of lightweight "cheap and cheerful" organic helicopter support, based on the MD500 series (pictured above). 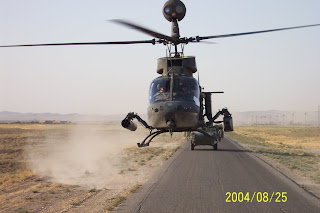 This is something that the US (and other) forces have enjoyed for so long that operations without close helicopter support are scarely thinkable (and when they say close, they mean close).

That British forces are being deprived of this fundamental tool is nothing short of a scandal yet the media cannot bring itself to discuss the issue in anything that even approaches an adult manner. Either it is gossiping about the "repellent, crass and trivial" or it is falling, uncritically, for the MoD "Boy's Own" spin and ignoring the substantive issues.

As for the Conservative Party... where art thou Gerald?