And now it's official 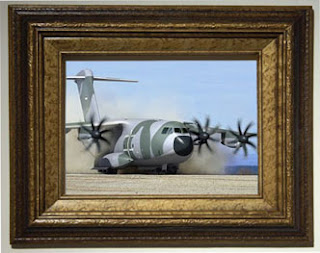 Airbus chief executive Christian Streiff was warning in October that there might be delays, and there were strong hints in December.

Now it's official. Airbus, in the form of its executive vice president, Tom Williams, has formally warned customers of a "potential" three-month delay on its 20 billion euro ($26 billion) A400M military transport aircraft programme.

One again, therefore, a symbolic European programme is crumbling into the dust, demonstrating the inability of the "colleagues" even to get a fairly straightforward project like a military transport off the ground. This is more than fifty years after the US introduced the iconic C-130 Hercules into squadron service.

Under pressure from L’Escroc, Britain has ordered 25 of these machines at an expected cost of £2.4 billion, to replace its fleet of 51 US-built C-130 Hercules transports. For some long time it has been suffering a marked shortage of airlift capacity as it waits for Airbus to bring the A400M into production.

In December last, so critical had the situation become that the government was mooting buying another three Boeing C-17 Globemasters for a mere $660 million (about £337 million).

The trouble is that the bulk of the orders for the C-17 have been for the USAF and the orders, barring a few, are largely complete, leading Boeing to close down the production line. Although the Canadians are also interested in buying C-17s, their orders are not sufficient to keep the line open and, therefore, there is some doubt about whether the order could be fulfilled.

But, if this is problematic for the RAF, the Luftwaffe, which is struggling with a fleet of clapped-out Transalls which, even in pristine condition, do not have the range adequately to service German requirements.

More devastated will be the "colleagues" though. As with the troubled A-380, the A400M was always more than an aeroplane. It was a symbol of integration, in this case forming the nucleus of a joint Franco-German military air transport command, a precursor to a European airforce.

I am minded – showing my age somewhat - of the glorious "Telegoons" where Neddy (I am sure it was he), lacking a firearm, conspired to hold up a bank with a colour photograph of a gun. It looks as is the nearest the "colleagues" are going to get to their transport command in the foreseeable future is a colour photograph of an A400M - in the production of which Airbus seems to excel - which, presumably, they can frame and hang over their mantleshelves.