The mummification of politics 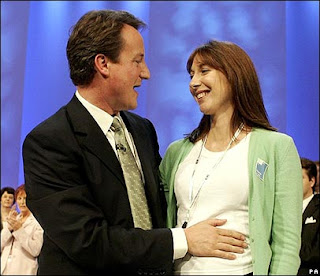 It would be possible to accuse me of mummification in that I raised the question of whom did the fragrant Samantha Cameron ask to stay with her children when her nanny became ill and she had to attend one of the Conservatives’ gleaming fund-raising soirees. But I think I am in the clear. I was not the one to raise the subject of the nanny first and, having brought up a child without benefit of nannies, I know what happens to most people when nanny/babysitter drops out for whatever reason: you make desperate phone calls to friends and other parents, calling in favours and offering babysitting in return.

This sort of thing is taken for granted and the only reason one even thinks about it all with regard to the Camerons is because they do tend to bring the subject of their family – three children, one of whom is disabled and another a baby – into the public arena, as if having children and bringing them up somehow makes up for lack of experience in other matters and lack of understanding of various political issues. (Just exactly how is the Boy-King going to get that opt-out of the Social Chapter? He would have to change the consolidated treaties for that.)

For some reason having children has become the only criterion that is regarded at all seriously by numerous people in politics, the media and, I have to admit, even among ordinary people interested in politics.

As so many other developments, this has gone a good deal further in the United States, particularly on the left of the spectrum. The latest display of mummification is the first woman Speaker of the House of Representatives, Nancy Pelosi, lifting her gavel of office and announcing that this was all for the children.

Ensuring that the House of Representatives acts well and responsibly is for the children? Nothing to do with the American Constitution?

Since then we have had tearful comments about Bush being unable to understand the pain of people whose children, grandchildren, nieces and nephews are in Iraq. Why has he not sent his daughters there, sob these people. Well, because he cannot send his daughters anywhere. He cannot order them to enlist, as James Taranto points out in the Wall Street Journal summary of Best on the Web.

In truth, members of the military are adults who have made an adult commitment. They deserve to be respected for their maturity, not patronized as victims. It dishonors them to use their sacrifice as a political cudgel.

We have seen a similar development in this country, though we often call it Dianafication – a general over-sentimentalization of every issue. Partly, I suspect, that is because the British are living up to their reputation of the nation that really does not like children very much and partly there is an inborn sentimentality in political thinking in this country.

Be that as it may, my colleague has pointed out on numerous occasions that while copious tears are shed at every death of a serviceman or servicewoman, there is next to no discussion on the subject of British defence policy. 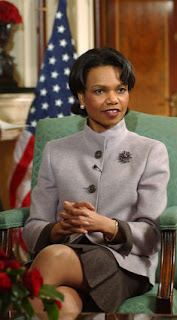 The latest display of mummification in the United States is Democratic Senator Barbara Boxer's attack on Secretary of State Condoleezza Rice because she has no children. Apparently, it is no longer possible to discuss political or strategic matters if you cannot display your credentials as a parent.

The junior senator from California apparently believes that an accomplished, seasoned diplomat, a renowned scholar and an adviser to two presidents like Condoleezza Rice is not fully qualified to make policy at the highest levels of the American government because she is a single, childless woman.

Certainly, we have all had occasion to criticize Secretary Rice, not least for her tendency, shared by most of her predecessors, to accept the State Department's wisdom. But her private life is of little import compared to her achievements in public.

It is impossible to be a leader of the opposition in Britain if you cannot display your credentials as a parent. So we hear endlessly about the Camerons’ children and family pastimes. The only problem is, of course, that family life chez Camerons is very different from the ordinary home life of most people in this country, whether we are talking of one or two-parent families, working or stay-at-home mothers.

Nor is this obsession limited to the leadership of the Conservative Party and the media that covers the Camerons. I well recall listening to an excellent presentation by Ruth Lea, Director of the Centre for Policy Studies at a Bruges Group conference during which, among other matters, she talked about demographics and birth rate in Europe. This is a somewhat complicated but very important issue.

During the break I was accosted by two members of the audience who demanded to know whether Ms Lea had any children (I had to admit complete ignorance of her private life) and if not, how could she talk about demographics.

There are several problems with this attitude. The inevitable one is not just the mummification but also the infantilization of politics. Well do I recall Tony Blair’s killer argument for the Dome: if his thirteen year old son could see the point, why could not other and older people do so. Ewan has long ago stopped being thirteen and the Dome has turned out to be the sort of disaster all those older people predicted. The same is likely to happen with the 2012 Olympics.

The other problem is that emphasis on the private lives of politicians leads to an insufferable amount of coverage of what is not really anybody’s business.

Let me be a little more specific. When a member of a government or a party that make it impossible for most parents to exercise choice in their children’s education, sends his or her own offspring to a private school, that is a legitimate subject for the electorate to know about.

The issue is not the child or the child’s care but political hypocrisy and arrogance. That we need to know about.

When a certain Deputy Prime Minister abuses his position and his office, bullies his staff, sexually harasses his female staff, that is not, pace the Opposition, a private matter. Similar behaviour on the part of somebody in the private sector is sackable. The electorate does have every right to know and demand punishment.

On the other hand, various private misdemeanours, particularly in the past, are not of any importance to the electorate though they are treated as such by the media, the journalists being rightly convinced that it is the private that interests their readers. Then the same readers wonder hypocritically why more and better people, people with lives, careers and background do not go into politics.

For the moment the Americans are fortunate in that the likes Secretary Rice can brush off Senator Boxer's idiocy. We, it seems, have leapfrogged over the process and have already arrived at the position when the personal is the only thing that can be counted to be political.