Cash for Kim - the story continues 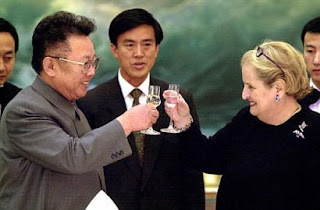 To give the new SecGen of the UN, Ban Ki-moon, his due, he seems at first to have responded reasonably well to the latest UN scandal, the money passed on to North Korea'’s Kim Jong-il by the United Nations Development Programme without a great deal of supervision.

I wish I could say that it was this blog that did the trick but, I suspect, it was the probability of a prolonged campaign by the Wall Street Journal that encouraged Mr Ban to pronounce on the subject.

A week ago on Friday Mr Ban’s spokesman announced that the SecGen had met with Ad Melkert, associate administrator of the UNDP (what is he associated with, one wonders) and added:

The Secretary-General will call for an urgent, system wide and external inquiry into all activities done around the globe by the U.N. funds and programmes.

The key word, as the following Monday’s WSJ editorial pointed out, is “external”. We all remember how long it took the previous SecGen, Kofi Annan (father of Kojo and brother of Kobina) to set up the independent Volcker Commission to find out what has been going on in the Oil for Food scam. Admittedly he picked a man whom he had considered to be “reliable” to chair it but, alas, the report was not quite what SecGen Annan had wanted.

The UNDP announced in a letter, published in Monday’s WSJ, that it welcomes “an independent and external audit of our operations in North Korea”. In the same letter, readers were assured that

If the member states of the U.N. and UNDP’s board were to decide that our presence there were no longer useful, we would leave immediately.

Brave words. Unfortunately, one of the members of that board is North Korea itself (it also sits on the board of UNDP’s affiliate, the UN Population Fund (UNFPA) and if UNICEF as well as being a member of the UN Disarmament Conference. What are the chances of Kim Jong-il’s henchmen (for who else would be sent to negotiate on these august boards) agreeing that the UNDP and its hard cash were no longer wanted in North Korea? One of the many tales of porcine aviation that the UN is so fond of regaling us with.

Meanwhile, the UNDP is twisting and turning. In a press conference last Friday the same Ad Melkert dismissed the problem with the words:

We’re not talking about hundreds of millions of dollars. … Over a period of 10 years it is, of course, tens of millions.

Oh well, that’s all right then. Actually, the sum is $27.7 million and, indeed, it is chickenfeed compared to the Oil for Food scam.

There is a long piece on North Korea, the UN and various ramifications of the problem, both nuclear and humanitarian, here.