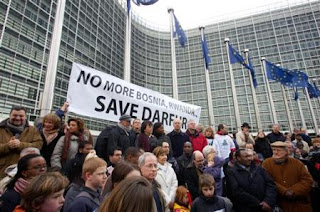 On a bitterly cold and windy day, some 500 demonstrators formed a human chain around the Berlaymont, the main office of the EU commission in Brussels.

This is according to AP which tells us that the demonstrators were calling on "European Union foreign ministers" to take urgent action to prevent further bloodshed in Darfur.

This is typical AP and many other media outlets use the same terminology. But they are not "European Union foreign ministers". They are the foreign ministers of the EU member states – more than a semantic difference. In theory at least, they are supposed to be representing the member state interests.

Anyhow, why the demonstrators chose the commission building, heaven only knows, as the ministers meet in the Justus Lipsus building, which is a good ten-minute trot away.

But that did not stop Belgian Senator Alain Destexhe, with Belgian politicians and members of the EU parliament joining the protest, calling for the foreign ministers, meeting as the General Affairs Council on Monday, to take concrete measures to force Sudanese and rebel forces to adhere to a cease-fire.

"We want tougher action by the EU and by the United Nations," Destexhe said. "Darfur is the major tragedy ... We think the EU is not doing enough." But what does Destexhe and his fellow travellers think the EU could do? To misquote Stalin, how many divisions has Solana?

The best the demonstrators can hope for is yet another round of
grand but futile statements, denouncing whatever it is needs denouncing this time. But, when it comes to action, neither the EU nor the member states are going to do anything that has any chance of proving decisive. But then, it was always going to be that way. Perhaps we should get the Boy King back in to cuddle some more babies.