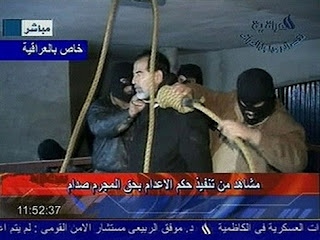 Now that Gordon Brown has also made his displeasure at the execution of one of the nastiest recent tyrants known we can all relax. Romano Prodi, Hosni Mubarak, John Prescott, Gordon Brown, old uncle Tom Cobbleigh and all. One has to admit that the people of Iraq do not seem that upset about the going of the old mass-murderer but what do they know?

I know I am not the only person around who feels nauseous by the so-called popular horror, particularly among the West European elite, at the execution of Saddam Hussein and his taunting by some Shi’ite guards. Would it be too much to ask all these self-appointed guardians of international public morality to ask themselves what their reaction would be if they or their nearest and dearest had gone through what the people of Iraq have gone through under the far-from-benign rule of Saddam Hussein, his psychopathic sons and other Ba’athists close to him?

Actually, we know the answer to that in a round-about sort of way. Take Romano Prodi, for example. (Well, all right, I’ll take Romano Prodi.) The man is going to various places, such as Russia, a country known for the wonders of law and order, calling for a world-wide moratorium on capital punishment. Terrible, terrible, he says. Not fit behaviour for civilized countries and humane societies.

Could someone remind Signor Prodi that within living memory a certain Benito Mussolini together with his unfortunate mistress, Clara Petacci, hardly a war criminal and other members of his entourage were shot by the Italian partisans without the benefit of a trial, let alone a public one, let alone defence lawyers. Their still bloody bodies were then hung upside down in a public square in Milan from meat hooks. Not the behaviour of a civilized country – and Italy is proud of her long, highly civilized and extremely bloody history.

What about the Nuremberg trials, also within living memory? I have lost count of the times I have been told that the only way the former Soviet empire can sort itself out is by having something like a Nuremberg tribunal. Few of the people who make that comment have any suggestions as to who should be part of that tribunal, the former Soviet empire not having been pulverized the way Germany was in 1945 but that does not stop them from pontificating.

To be completely honest, the Nuremberg trials were a travesty of legality, with people tried on hastily invented charges by the conquerors of their country and a very questionable tribunal. The Soviet judge, Iona Nikitchenko had presided over several of the Stalinist show trials in the thirties. One of the Soviet prosecutors had been involved in the mass murder of Polish officers in Katyn, one of the indictments he then presented at Nuremberg.

Usual rules of evidence were deliberately ignored and it was made clear that the terrible crimes the Nazi defendants were accused of could happen only in the framework of an aggressive war.

Some of the defendants were acquitted, some were given gaol sentences, most were sentenced to death and those that had not committed suicide, were executed with the executions filmed to be widely shown. According to Albert Speer, he and others who had been sentenced to imprisonment were sent in to clear up the mess after their comrades’ execution. Tsk,, tsk, not the behaviour of a civilized society.

Ah, but those were different days. A terrible regime had been vanquished in war. Ahem, what exactly was Saddam’s regime like? Considerably worse than Mussolini’s though not worse than Hitler’s.

What of some other events in recent European history? The execution of Imre Nagy together with three members of his government after the suppression of the Hungarian revolution? All four of them were tricked into imprisonment and executed after a secret trial. In fact, the executions were not announced till after they had been carried out.

Another one to be executed after that secret trial was General Pál Maléter, the commander of the Hungarian insurrectionary forces who had been kidnapped when he went to negotiate with the Soviet forces.

Ah but this was all a long time ago, though one would be hard put to describe Nagy or his colleagues as being terrible oppressors or, indeed, oppressor of any kind.

The point is that over the last few decades Europe, first Western, then Eastern developed to a point where the likelihood of a monstrous regime seems low. In the United States that likelihood had never even existed. As a consequence we feel that we can pontificate on what is and what is not moral behaviour in connection with bloodthirsty mass murderers.

James Taranto had an interesting item in one of the round-ups of the Wall Street Journal Europe Best of the Web last week. He refers back to an article by Debra J. Saunders in the San Francisco Chronicle that takes to task all wailers about Saddam’s untimely demise.

The test of a government's commitment to human rights is measured by the way it treats its worst offenders. History will judge these actions harshly.

Excuse me? You mean history will judge Saddam’s executioners more harshly than him and his fellow mass murderers? Ms Saunders has no doubts about that:

What nonsense. The measure of a government's commitment should be in how it treats its citizens. Hussein had countless Iraqis killed without a trial. He ordered the death of an 11-year-old boy because he thought it was "the right of the head of state." History will focus on his misdeeds, not on the timely execution of a guilty despot.

Saunders is obviously right: It is perverse to consider the execution of a mass murderer as worse than the murder of children.

But she doesn't quite capture the full perversity of Dicker's statement, "The test of a government's commitment to human rights is measured by the way it treats its worst offenders." By this reasoning, hanging a thief or a jaywalker would be less bad than hanging a mass murderer.

And suppose we apply the Dicker principle to the previous regime in Baghdad. How did it treat Iraq's worst offenders, namely Saddam Hussein his sons and assorted hangers-on? It provided them with nearly limitless wealth and power. By Dicker's logic, this is close to ideal: The more brutal a dictatorship and the more lavishly its rulers live, the stronger its commitment to human rights. What a monstrous moral inversion.

The following day there was a defence of Richard Dicker’s statement not by him, as it happens but by someone who clearly still believes in the Easter Bunny. This is what a reader came up with:

I don't think history will long remember how Saddam was executed. But Dicker's not making an inverse statement--the worse the criminal, the better the treatment he should receive. That's nonsense. He's talking about having a "floor" of acceptable behavior for everyone, regardless of how vile he is. For example, while one could be happy to see Timothy McVeigh walk to the gas chamber, it would be unseemly to have a jeering crowd throwing rotten fruit at him as he went.

In Dicker's case, I suppose he wouldn't want anyone put to death. That amounts to the lowest common denominator that he would apply to anyone. Why do you suggest that he wants to elevate Saddam? Were you speaking tongue-in-cheek? I suppose his choice of pabulum was clumsy; replace the words "worst offender" with "most vulnerable" and it's more correct. Why not just attack his poor choice of verbiage than make an absurd claim of a "monstrous moral inversion"?

The point about the need for solemnity around the execution is a fair one and it does not get into the argument about the horrors of capital punishment or the supposed lack of fairness in Saddam’s trial.

But to suggest that “worst offender” can equal to “most vulnerable” raises serious questions about certain people’s thinking. Most vulnerable usually refers to the sick, the old, children, disabled and, in certain societies, women. All people, who were acceptable to Saddam as victims. How does it begin to describe a bloodthirsty tyrant who is getting an open trial, defended by lawyers of his choice and being allowed to get away with behaviour in court that would not have been allowed either in America or in Britain?

So what of this notion that the manner of Saddam’s execution had made a martyr out of him and wiped his crimes off the Arab people’s memories? Given that with the best will in the world, no pro-Saddam demonstration managed to have more than a few hundred, possibly a thousand or two of participants, this is probably not true.

If those who say it believe it, they are exhibiting the most devastating contempt for Arabs. Was the manner of Mussolini’s death seen as part of his martyrdom except by those who had seen him as a hero? Has the Nuremberg trial negated Nazi crimes? Why exactly do we assume that Arabs, specifically Iraqis, will somehow react in such a ridiculous fashion? (As for Hosni Mubarak’s statements on the subject, one should take them with a large dose of salt until we have a clearer idea of the state of play on imprisonments, executions and treatment of such hardy criminals as student bloggers in Egypt.)

Of course, the entire uproar about the horrors of capital punishment is a form of cultural imperialism without the responsibility of the nineteenth century variety.

When slave trade and then slavery was abolished in the British Empire and the Royal Navy fought a long battle against slavers in various parts of the world, they assumed responsibility for their moral stance. And, unlike the more doubtful opposition to capital punishment, no matter what the circumstances, opposition to slavery is a moral stance.

When thuggee and suttee were abolished in India the British authorities shouldered the responsibility for eliminating those horrors and for administering the lands in question.

After all, what burden will Romano Prodi be shouldering during his campaign to abolish capital punishment around the world? Come to think of it, will he be taking this campaign to China or various Arab countries (not Iraq)? What administrative support are all those West Europeans and Americans with their high moral tone offering for countries that are trying to free themselves from particularly oppressive tyrannies?

One final question: if things go wrong again in Europe, will there be the same breathless distaste shown for capital punishment even for the worst offenders? Could the likes of Gordon Brown, Romano Prodi and Richard Dicker answer the question I heard from a young German historian some years ago. Agreed that there were many problems with the Nuremberg trials but would you rather they had not taken place?