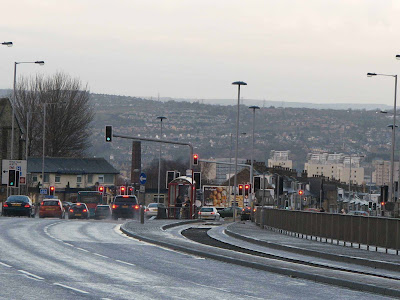 If you look carefully at the picture above, you can count no less than 22 sets of traffic lights. Those, complete with the paraphernalia of signs, barriers and bus segregation, is the classic response of the conventional traffic engineer - creating an expensive, sterile nightmare that magnifies the delays and frustration, destroying visual amenity. 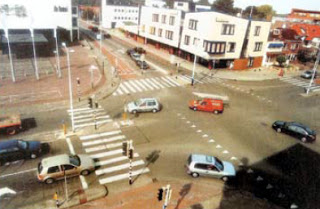 Such a scheme could have been the response of the City Council of Smallingerland in Friesland, Holland. In the year 2000, the councillors and officials were about to implement a long-planned scheme to reconstruct an important traffic intersection in the City of Drachten, known as the Laweiplein.

Email ThisBlogThis!Share to TwitterShare to FacebookShare to Pinterest
Labels: Transport