Of course, we are in favour of democracy ... 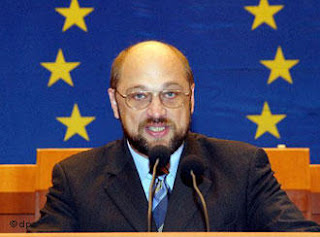 ... it's just we don't really like it when it does not go the way we want it to. Or so, clearly, reasons Martin Schulz, leader of the Socialist Group in the European Parliament. He is not happy about what the EUObserver quaintly describes as the centre right being sort of in power in the European Union.

The reason for this mini-flap is that the former leader of the EPP, Hans-Gert Poettering (pictured below), has been elected as president of the European Parliament, thus becoming the third vaguely right-wing person to hold an important position in the EU. The others are Commission President Barroso, whose right-wing credentials are questionable or would be if one knew anything about his politics, and Chancellor Angela Merkel, temporary president of the European Union, rather handicapped by the grand coalition she heads back in her own country. 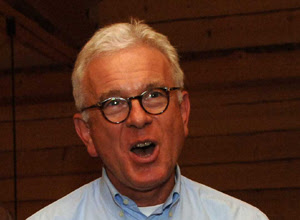 None of this is the slightest importance, politically speaking. Merkel is in that position only till the end of June and the Toy Parliament that Poettering presides over is not exactly a power in the land. In any case, what matters in EU politics is attitude to further integration and greater centralized regulation. In that there is not much to choose between the left and the right, the division being between the main groupings and the smaller ones.

Socialist leader Martin Schulz told EUobserver that while he was "not concerned" by the set-up, he added that "We're here to ensure that this will not change into a dangerous situation."

Oooh-err! Those centre-right Germans and Portuguese can make any situation dangerous.

Herr Schulz is worried by another development and that is the formation of the new right-wing (or so we think, though many of them are old-fashioned socialist corporatists) grouping in the Toy Parliament, the Identity, Tradition and Sovereignty group.

Disregarding the fact that all these people were elected in their various countries, just as Herr Schulz was and that they have not actually broken any rules in the European Parliament (they have not even pointed out the criminal past of various Commissioners, as UKIP has done), he is demanding that they be deprived of their rights.

Immediately after the announcement of the 20-member group's formation, Mr Schulz wrote to leaders of the parliament's democratic groups, urging them to deny the new group posts under the proportional d'Hondt system of appointment.

In his letter Mr Schulz says: "We must not abandon this Parliament, which symbolises the integration of Europe, to those who deny all European values."

Let us for the moment set aside such awkward historic incidents as the Inquisition, religious wars, bloodshed on a large scale, concentration camps and various others I am too tired to mention. Let us take Herr Schulz's statement at its face value. Surely those famous European values, as represented by the Toy Parliament, include the concept of democracy and freedom of speech.

In that case, much as one may dislike what the various members of the new grouping say, as long as they do not break the law (and that contingency is provided for by their immunity) and are not linked to any terrorist or criminal organization, they are entitled to the rights and privileges (of which there are many) exactly as the Socialists are.

Of course, if our suggestion were taken on board and the European Parliament were abolished with consequent large savings to all of us, none of these problems would arise.

As this is unlikely to happen in the near future, let us consider what might emerge if one started banning people from taking the positions for which they were elected because some do not like their views. Can Mr Schulz answer for all members of his grouping? Have none of them expressed support for deeply unpleasant systems and leaders like Stalin, Mao, Ho Chi-minh or Mengistu? Have none of them wept over the wrongs of terrorists who openly say that their aim is to exterminate as many of their enemies as possible?

What of Glenys Kinnock, chosen at random, who came back from a study trip in South Africa and neighbouring countries before the end of apartheid and cheerfully admitted that she had not bothered to investigate conditions in SWAPO prison camps?

What of the various East Europeans who had been in their Communist parties before "seeing the light" not to mention the various goodies, and becoming all European in their attitudes? Should they not be deprived of various rights and privileges?

It seems that European values, so dear to the heart of Herr Schulz and Chancellor Merkel, do not include freedom of speech or of historical debate. Once again, it has been put forward as an aim of the German presidency, to make Holocaust denial illegal across the European Union.

Germany has set numerous goals in its 25-page programme for the EU presidency, including everything from securing Europe's energy supplies to outlawing Holocaust denial, improving Europeans' image of the bloc and getting serious about climate change.

This is beginning to be seriously boring.

Let us be quite clear on the subject. No event in history, however horrible, can to be immune from discussion, wrong-headed arguments, lies and denials. That applies to the Holocaust as much as the far greater numbers murdered by various Communist tyrants.

It made sense to pass that law in West Germany and Austria immediately after the war. Let us not forget, however, that both those countries have been democracies for nearly six decades and there is not particular evidence of that coming to an end. Far from spreading laws passed at a particular time in history to other countries, who are in no need of this sort of cleansing, it may be time for Germany and Austria to rethink the matter for themselves. They have grown up and can treat deeply unpleasant episodes in their past as mature democracies.

Alternatively, we might have to start campaigning for the outlawing of denial of Communist atrocities. And then where will Martin Schulz and his grouping be?