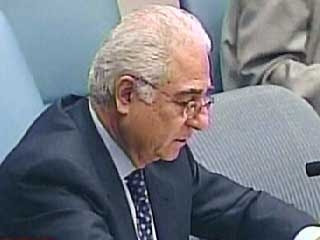 Benon Sevan, the former Chief of the UN’s Oil-for-Food scam … I mean, scheme … has been indicted in New York federal court for allegedly taking bribes under the scheme. The FBI, the US Attorney’s office and the Manhattan District Attorney have issued a press release to that effect.

According to the press release, Sevan allegedly received $160,000 generated from the sale of Iraqi oil under the program from one Ephraim Nadler, an associate who was also indicted, on behalf of the government of Iraq. The money was allegedly used to pay off overdue credit cards and bills.

Specifically, the two were charged with wire fraud, based on their depriving the United Nations of its right to Sevan's honest services; bribery concerning an organization — the United Nations that receives more than $10,000 annually from the federal government; and conspiracy to commit these offenses.

Mr Sevan, described by Fox News as a “career diplomat” but, really, a man who had worked his way through the UN for 40 years, is believed to be in Cyprus, with whom the United States does have an extradition treaty but it does not cover financial crimes.

Needless to say, Sevan’s lawyer is denying any wrong-doing:

"It is unfortunate that the Independent Investigative Committee [IIC] has succumbed to massive political pressure," Eric L. Lewis, a Washington-based lawyer, said in a written statement. "After eight months of investigation with more than 60 employees and a $30 million budget, the IIC needed to produce a 'smoking gun.' As Mr. Volcker has conceded, there is no smoking gun. Mr. Sevan never took a penny."

Claudia Rossett has a picture on her blog of the block of flats, Benon Sevan is supposed to be living in Nicosia though not the place where his aunt is supposed to have had her fatal accident.

Ms Rossett sums up the story so far in greater detail in her National Review column, in which she describes this development “as the single-most-promising United Nations reform effort to date”. Many more of this kind, say I.