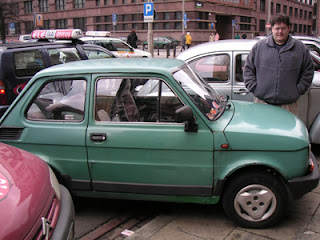 Here we go again. After writing innumerable pieces saying that the European Union is "dead man walking", up it pops with another little jab at the member states' systems, sufficient to demonstrate that the "walking" bit is definitely right, and the Union is still alive and kicking.

We are talking here about vehicle tax and it was in April last year that we recorded EU commission action against Cyprus to purge it of the deadly sin of national discrimination, where it was charging higher taxes on imported second-hand cars than it was those bought new on the island.

Now Poland has also attracted the ire of the Community, with a report yesterday that the ECJ has ruled a Polish second-hand car tax illegal. This is exactly the same issue which confronted Cyprus, where the Polish government levied a higher tax on second-hand cars imported from other EU countries than on vehicles registered at home.

And, as with Cyprus, the Poles thought they had a good reason for their tax. It was intended as a mechanism to curb soaring imports of cheap second-hand cars from Western Europe, which were harming domestic sales of new vehicles.

However, this is not the end of the game, as the commission has launched infringement proceedings against Hungary, Denmark, Cyprus and Finland, saying their car taxes were incompatible with EU rules. EU newcomer Romania may also be added to the list.

Gradually – and it is exceedingly gradual – member states are being reminded that they lost their tax autonomy in certain key areas when they signed up to the EU.

And, to cement this lesson into place, EU finance ministers are to discuss possible harmonisation of car tax rules in May. With a proposed directive already on the table, and car taxation rules already under discussion, this begins to look like a done deal.

It is certainly one to watch.