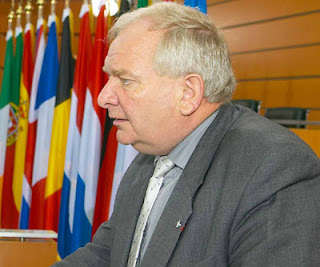 It is turning out to be a little more than mere intrusion on private grief, as we first suggested. The new leader of the EPP, Frenchman Joseph Daul – who gave the Tory Boy Blog so much heartache – may turn out to be something more than a protectionist Europhile.

According to a story in The Financial Times - carefully, if lovingly planted by UKIP - the man may be a crook as well.

It is certainly and indisputably the case that the new leader of the EU parliament's biggest political group is under investigation for misuse of public funds in France – part of an inquiry into the diversion of €16m (£10.6m) of agricultural money in the 1990s that has also ensnared three former agriculture ministers. 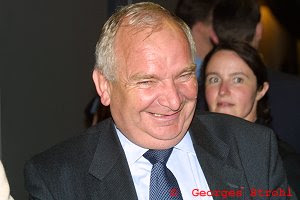 Daul was head of the National Breeding Confederation, the beef producers' union, between 1993 and 1998 and was placed under investigation in 2004 for allegedly diverting money to finance the farmers' union, the FNSEA, and to pay his own staff. He is not accused of benefiting personally but of "complicity and concealment of the abuse of public funds".

Investigating magistrate Henri Pons, a key player in the Clearstream affair, France's latest political and financial scandal, is handling the case in Paris. Nicolas Jacquet, the head of the French grain producers' union, who first complained about the diversion of his members' money in 2000, said Mr Daul and his six co-accused had used every legal avenue to avoid a trial. However, he thought a trial would be delayed until after the French presidential election in May. MEPs could lift Mr Daul's immunity from prosecution if he were charged.

This is very reminiscent of the case of Jacques "Wheel" Barrot, the EU transport commissioner. Mr Barrot, another French crook from Chirac's UMP. In another story broken by UKIP, he failed to tell his boss José Manuel Barroso that he had been convicted of fraud in a party funding scandal, this one claiming as his excuse that fact that he had been pardoned by his pal Chirac.

One hesitates to declare that all French politicians are crooks, but it would be nice to have an example of one who was not. It would also be nice to think that the Tory MEPs – of which Daniel Hannan is one - now had enough sense to get out of the EPP pronto.

It is too late, of course, for the Boy as the publicity to come on this issue cannot but help remind people of his failure to honour the one promise he made of any consequence during his leadership campaign. He is about to learn the hard way that taking the easy way out in politics is never, in fact, the easy option.