Whom is one to believe? 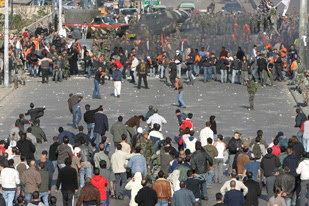 One can joke about our own demonstrators and armchair revolutionaries. In Lebanon matters are more serious. Hezbollah has withdrawn from the government and called a general strike yesterday. The strike developed into a running battle between different factions and The Ouwet Front, which bills itself as “Personal Views and Opinions of Lebanese Forces Members” has some interesting pictures.

Meanwhile, the BBC World Service website, calling its story “Warning of new Lebanon Protests”, talks of Hezbollah-led opposition (at least they don’t call it “loyal”) and describes Fouad Sinioara’s government as “Western-backed”. At least, they have stopped calling it “American-backed”.

The opposition is demanding a big enough share in government to give them veto power over any decisions they do not like - a step the Western-backed government has not been willing to take.

Right, let’s get several things straight. The Siniora government was elected by the people of Lebanon, many of whom are sick of Hezbollah, sick of Iranian interference and sick of Syria’s control of parts of their country and society.

Hezbollah is not the opposition. It is the one militia that refused to disarm despite that famed UN Resolution 1559. It wants to run Lebanon’s government and that is why it is demanding the power of veto. No government, let alone an elected one would agree to that.

Having got that out of the way, let us look at the figures. The BBC, as all western media outlets say that three people were killed in the clashes and 100 wounded.

Over on Al-Jazeera, the story is slightly different. For one thing they talk of rivals clashing in northern Lebanon and, it turns out, that there was an exchange of fire the northern Lebanese city of Tripoli.

Security forces were trying to break up the clash in the northern city of Tripoli, which started after the funeral of a Sunni Muslim government supporter killed in clashes with opposition protesters on Tuesday.

Thousands had packed the streets of the northern city of Tripoli, Lebanon’s second largest city, for the funeral of Bilal Hayek. "Sunni blood is boiling," chanted the mourners, some of them armed.

There are, as yet, no news of casualties from Tripoli but Al-Jazeera’s report talks of six people killed and 176 wounded during the strike yesterday. Whom is one to believe? And another thing: where are those Western and Muslim protests? Are those innocent Lebanese civilians no longer of any interest?