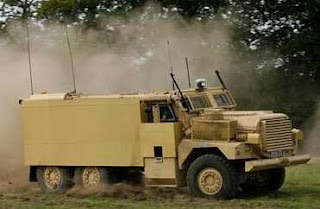 But, in order to equip them even better (/end irony), the MoD agreed last year, grudgingly, to buy 100 "Mastiff" mine and blast protected vehicles, to supplement the dangerously vulnerable "Snatch" Land Rovers.

And, as we reminded our own readers, when he announced their procurement on 25 July, defence secretary Des Browne promised that there would be an "effective capability" in place in Iraq by the end of the year.

Now, at last, Liam Fox is on the case, fronting a press release on the Conservatives' web site. It claims that British troops in Basra have so far received only FOUR Mastiffs of the "effective capability" promised.

FOUR Mastiffs… from July of last year to January of this, all the great might of the MoD can manage is four armoured trucks. It's as well we're not fighting a serious war out there, isn't it... or maybe, its just that we're not serious about fighting it.