A matter of strategic importance 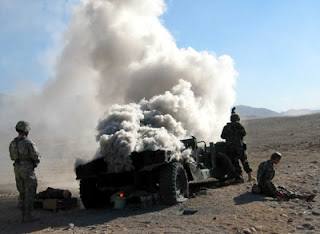 The US Department of Defence, in one of its routine press releases is extolling the virtues of its National Training Center in Fort Irwin, California.

There, troops are put through their pre-deployment training, prior to being sent to Iraq. In particular, they are taught how to deal with IEDs – the picture here showing a simulated vehicle-borne IED.

The unit works with the Joint IED Center of Excellence, which opened its doors in summer 2006 to share the latest counter-IED tactics, techniques and procedures with deploying troops.

Ultimately, countering IEDs has huge implications for US military operations in the war on terror, he says. Although IEDs may be relatively simple weapons, they have the impact of strategic weapons. "If IEDs kill enough Americans, that may change the will of the American public, which is what we require in order to stay in Iraq and get the job done," he said. 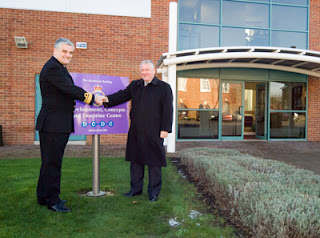 By coincidence, our own MoD has put up a press release on the opening by defence minister Adam Ingram of a £2 million extension at the UK's flagship Development, Concepts and Doctrine in Shrivenham, Wilts. We are told that it was finished early and under-budget.

The Centre is essentially the "Vatican" of the defence establishment, providing the "intellectual bases" that inform "coherent decisions" in Defence Policy, Capability Development and operations, both now and in the future (don't blame me – that's what the press release says).

In particular, the Centre develops the Armed Forces' doctrine, the detailed procedures and guides by which the Army fights its battles.

In dealing with the threat of IED, therefore, it is to Shrivenham that the Army goes for its advice. And my spies tell me that it is there where there has been some of the greatest resistance to the deployment of mine protected vehicles and other technical counter-measures.

Thus, while we hope the 100-plus staff of the DCDC are very happy in their new home, we would like to think that there is enough money left over from the savings in the budget to send some of their number to the National Training Center in Fort Irwin, California, where they might learn something about dealing with IEDs.

In particular, we would hope they could talk to Lt. Col. Taylor who, I am sure, would be happy to tell them about the strategic importance of IEDs, something that could take back to the Vatican and tell all their friends. If they then come up with some really "coherent decisions" on how the British Army should deal with IEDs, then the £2 million spent on their new home might just have been worth it.