"The international community must do something" 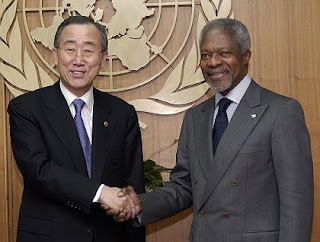 On the day the government forces in Somalia, backed by Ethiopia, ousted the Islamists from Mogadishu, the Daily Telegraph published a pontificating leader, entitled "The world must not ignore the Horn of Africa".

As the continuing catastrophe of the Horn of Africa means large numbers of migrants moving across the world, not ignoring the place and its problems could be described as rational self-interest. That is not how it was described by the leader writer of that esteemed newspaper. Instead, we had a good deal of waffle about how terrible things are in Somalia and how the government was unlikely to establish order, backed as it was by another country.

There was a reference to the American debacle with its Operation Restore Hope 14 years ago and a good deal of hand-wringing. The international community, according to the argument had not come up with a viable solution. Somebody, I suspect, had not looked at the map of the area or read even superficially about its history.

Curiously enough, several of the commentators insisted that the Islamic Courts were actually rather a good idea as they had imposed law and order, albeit Sharia law and order. One suspects, none of those people would like to live under the usually corrupt and unspeakably cruel Sharia law and order, but, hey, it’s good enough for those Africans.

What was the Telegraph's solution? Well, I expect, you have guessed it even if you did not read it at the time:

However, as argued above, their intervention may just as well leave a gaping power vacuum as create a platform for power-sharing talks. If the Somalis are to be rescued from the horrors of continuing anarchy, a neutral peacekeeping force will have to be deployed. For that, a UN mandate is required. The incoming Korean Secretary-General, Ban Ki-moon, should make Somalia the priority of his first months in office.

Nobody would pretend that restoring order in such a poverty-stricken, clan-based society will be anything but fiendishly difficult. But the identification of Somalia by Osama bin Laden as a potential launching-pad for terrorism precludes leaving it to its own factional devices. American intervention, both in the 1990s and more recently in support of business-backed militias challenging the Islamic courts in Mogadishu, soon proved counterproductive.

The same fate will befall the Ethiopian coup de main unless a UN-mandated force can rapidly be deployed. Even then, the chances of a political solution, perhaps between a reconstituted TFG and moderate elements in the courts, will remain slim. But it is well worth the try, and not merely in the interests of the region.

Fast forward several days and a new year, and what do we find? As my colleague has already pointed out, even more hand-wringing and calls for Ban Ki-moon to face up to the first great challenge: accusations of child rape and abuse by UN troops in southern Sudan. This is not Darfur we are talking about but the previous civil war with a great deal of atrocity on the part of government troops and militias directed against Christians and animists.

What surprised me this morning, if surprise is quite the right word in the circumstances of the new, improved Telegraph newspapers, was that they actually thought this was news.

It's not as if a number of blogs (and newspapers in the United States) have not written about UN abuses across the globe; it’s not as if Claudia Rossett had not conducted a dogged investigation into these many abuses. Do our journalists really believe that with the departure of that great and good man (according to most of them) Kofi Annan (father of Kojo and brother of Kobina) would miraculously change everything immediately?

To start with, as Claudia Rossett points out, Ban Ki-moon’s first job is to clear up the mess left behind by the sainted Kofi, unfortunately with the staff that was there under the latter and are, therefore, unlikely to want to do too much digging or too much clearing up. You never know what might crawl out of the woodwork. As for that Rossett woman … Just make sure she never gets a Pulitzer Prize for her journalism.

Secondly, there is a basic misunderstanding at the heart of the Telegraph’s analysis:

The reason that the UN so often behaves badly is, paradoxically, because so many people wish it well. Because the organisation embodies the loftiest of ideals – peace among nations – it tends to receive the automatic benefit of the doubt. We are so fond of the theoretical UN that we rarely drag our gaze down to the actual one. The UN has therefore fallen out of the habit of having to explain itself and, in consequence, become flabby, immobilist and often sleazy.

The reason, dear journalists, the UN behaves almost always badly is because its structure is in clear contradiction to its supposed principles and always has been.

Let me reiterate, just in case somebody from the MSM is reading this: the fact that the Soviet Union was made a permanent member of the Security Council from the very beginning, the fact that Ukraine and Byelorussia, republics within the USSR in the first of which an appalling though undiscussed civil war was being fought, were allowed to have seats in the General Assembly as if they were independent states, made the UN a sick joke from the very beginning.

Since then, it has gone from bad to worse, its one achievement being the Korean War, when the Soviet Union was temporarily exercising an empty chair policy. At present it consists of 191 members, most of whom would not begin to understand what democracy, freedom and human rights are.

The problem is not just that the UN is run by career politicians or lawyers, but that they are career politicians and lawyers who want to usurp power from national governments, particularly those elected through a democratic mandate. Neither they nor those troops who keep behaving like old-fashioned conquerors are accountable to anyone for anything.

There can be any number of inquiries but nobody is going to be put on trial (where?) or punished for misbehaviour. Most of those troops have gone home and their countries will refuse all co-operation if there is the slightest chance of blame being brought home.