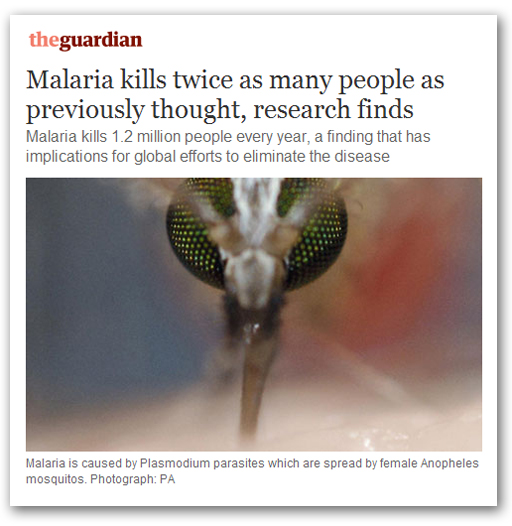 Watermelons kill, but not just if you eat them. As Dellers will tell you in his new book (UK edition) of the same name, they kill wholesale. One of those ways is by the restrictions (amounting to an effective ban) on DDT, which has led to a resurgence of malaria.

As a result, Dellers avers, the Greens have been responsible for killing more people than Hitler. Amd that would now appear to be more true than ever. The Guardian says the disease kills twice as many people as previously thought – 1.2 million people a year.

It also raises urgent questions, says the paper, about the future of the troubled Global Fund to Fight Aids, TB and Malaria, which has provided the money for most of the tools to combat the disease in Africa, such as insecticide-impregnated bed nets and new drugs. The fund, The Guardian coyly tells us "is in financial crisis and has had to cancel its next grant-making round".

However, as always, there is much more to this than meet the eye. The $22.6 billion fund has been beset by corruption and maladministration and now the fund head has abruptly resigned, part of a management shakeup after multiple scandals severely rattled some of the biggest donors.

The cynic might ask whether the sudden publicity on the issue, and funds shortage, might be related. And not a few might puzzle (albeit silently, for such things dare not be said in the open) whether saving lives in Africa simply makes for problems elsewhere, through over-population and migration.

But the fact is, malaria kills disproportionate numbers of the economically active, and as Africa drags itself up by its bootstraps, it is these people it needs. The death of these people has been in part responsible of the economic blight, making the DDT ban all the more tragic.

But even more tragically, the lessons still have not been learned, as the EU continues to block progress and cause economic havoc. And this, of course, is the hidden story which the likes of The Guardian will never tell. Even last month, we saw echoes of the turmoil created by the DDT ban.

There lies the ultimate terror – when greens and bureaucrats combine, death follows in their wake.