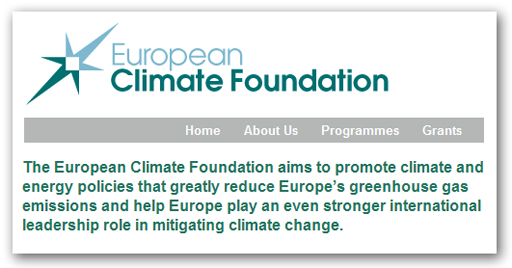 While the warmists are successfully focusing attention on the minor-league operations of the Heartland Institute, with a total budget for all its issues, which include health care, education, and technology policy, of around $4.4 million, their own funding arrangements, amounting to hundreds of millions of dollars, are largely evading scrutiny.

In 2009, picking up on the trail of global warming advocacy and its funding networks, I published this piece, followed by this, where I started looking at what I termed a "vast nexus of influence" - (with Shub Niggurath then writing a piece). Amongst others in the warmist policy camp, I identified the European Climate Foundation (ECF), set up in 2008 as an organisation to transmit funding from a group of funding organisations to a huge range of climate activists.

With offices based in three European countries, there are no unified (or any) accounts and the organisation issues no annual report on its website – and nor does it give any information on how much cash it hands out. Thus, while we have Moonbat bleating about "transparency", hundreds of millions of dollars are pouring into promoting warmist policy, with absolutely no transparency or accountability.

Yet, says Moonbat, "Anyone with democratic instincts should support the demand that the major funders of groups engaged in public advocacy should be made known to the public, whether those groups are leftwing NGOs, rightwing 'thinktanks' or self-declared lobbying companies". 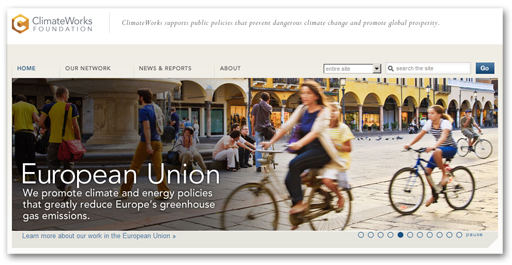 That the ECF needs looking at is evident just from looking at its list of "funding partners", some of which we explored in the earlier pieces. Just one indication of the scale of its funding comes from the Climate Works Foundation.

This organisation had portfolio of grants amounting to $120 million in 2009 – the latest figures available (below), yet this is only one of eight hugely wealthy funds supporting the ECF, including the €3 billion Dutch National Postcode Lottery. 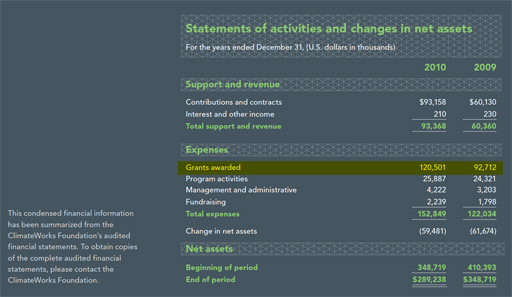 The Climate Works Foundation, though, is of special interest as it was in 2008, awarded $460,800,000 from the William and Flora Hewlett Foundation, a grant-making organisation with assets of $7.2 billion, which disbursed $353,400,000 in grants in 2011. It has made another grant to Climate Works only last week of $100 million – bringing the total grants to this organisation to just short of $600 million.

Where such huge funding is devoted to global warming advocacy, and policy development, there must indeed be a distortion of the democratic process, especially where politicians are also being paid. These organisations must come clean about the sources of their money, and provide exact details of how much is paid to which organisations, for what purposes.