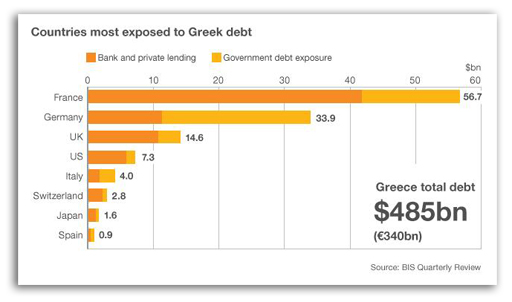 Says ZeroHedge, "reactions such as the one yesterday confirm that the market is not only broken but also very stupid. Which is just as those in charge like it". Of course, the media loves quoting market reaction. It gets endless, easy headlines which save the jornos having to think. But more and more, we see day-to-day market movements as being irrelevant. The markets, like the politicians, inhabit their own little bubble.

At the risk of becoming ZeroHedge groupies (which we are not), we also take note of this piece, which observes that Papademos and Samaras are both out their creating dire images of a post apocalyptic Greek state if a default occurs.

Maybe, we are cautioned, it is a good time to remember what Papademos' job is:


He wasn't elected. He doesn't represent the Greek people in a fashion that we are used to – running for election and winning the election. He was foisted on the Greek people by the EU – the very people he is going through the motions of negotiating with. His JOB was to get the Greeks to accept what the EU wants. If he isn't the most conflicted politician of all time, he is right up there.

Samaras may believe it, or may have decided this is his best route to power when the vote is passed and the Greek people decide to kick Papademos out.

These are important truths. We are not dealing with a monolithic bloc, with a single message that TPTB are anxious to get over to us, the plebs. The players in this game are divided and highly factionalised, each trying to sell their own versions of reality, in an attempt to make them come real.

Thus, not only does one have to take care when exploring what is said, equally important is who says it, and when.

It is in this context that we look at the latest Reuters report. This has it that Merkel, the Italian prime minister Mario Monti and Papademos "are optimistic that an agreement can be reached on Greece at Monday's Eurogroup meeting". The source here is Monti's office, in a statement issued after the three leaders held a conference call earlier today.

But, we are told – in an unsourced interjection - negotiations with lenders in the European Union and International Monetary Fund are again going down to the wire, straining ties between Greece and northern members of the currency bloc.

This is then bolstered by citing Der Spiegel magazine, which quotes Austrian finance minister, Maria Fekter. She says: "The skepticism is especially strong among the AAA states over whether Greece will be able to make it". Thus, she says: "The risk of a Greek insolvency is not off the table".

It must be assumed here that Monti is a creature of the EU commission, and can safely be taken as a spokesman for it – the organisation that wants, above all else, to keep Greece in the single currency, and maintain the integrity of the eurozone. He thus will be bound to put a "pro-bailout" spin on the outcome of talks, whereas, one assumes (with no evidence to support it) that Maria Fekter is a Merkel proxy.

Monti – according to Bloomberg - is emerging as a game-changer in Europe's debt crisis, "as German Chancellor Angela Merkel tackles a domestic political crisis and French President Nicolas Sarkozy focuses on his re-election bid".

Monti was scheduled to meet alone in Rome today with Merkel. First set for 20 January, with Sarkozy, it was rescheduled without him and then cancelled today as German President Christian Wulff resigned amid the threat of a legal probe into corruption allegations. "Monti is extremely important because Italy is really the make-or-break country in the euro crisis", says Christian Schulz, an economist at Berenberg Bank in London. He has "re-established Italy as an important force in European politics".

So it has come to pass that we have had the three-way telephone conversation today with Merkel and Papademos. Monti and Merkel will also stay "in close touch" before the Eurozone meeting on Monday. Seasoned watchers may immediately notice something missing … Sarkozy. The Merkozy is no more … is it being replaced with the Merkonti?

Actually, that would be a misinterpretation of the relationship, as the two are ostensibly antagonists, as indeed Merkel and Sarkozy have become. With French exposure to Greek debt much greater than Germany's (see also pic), French banks are expected to take a battering. Germany, on the other hand, will be expected to pick up the bill.

Either way, though, time is running out. The FT blog has documents which "make clear the schedule is slipping dangerously". The Wednesday meeting of eurozone finance ministers, that was cancelled, was supposed to approve the launch of the restructuring so the process can begin today. Instead, we have the three-header with Monti in the chair.

All of this adds complexity upon complexity, unless of course you are the British MSM. Then all you have to do is plant the flag and talk in trite generalities, as does the Daily Mail today.

All its audience needs to know, the paper decides, is that Lord Howell, father-in-law to the Chancellor George Osborne, told peers (yesterday) that Britain was pressing for a "realistic and sustainable" solution to Greece's debt crisis, which he warned was having a "chilling effect" on the British economy.

He said "uncertainty in Greece must be brought to an end ... without utterly destroying that noble country". It seems that "infighting" is the problem, and if only these damn Johnny foreigners would stop it, and jolly well get down to sorting the problems, everything would be tickety boo.

So there you are then. These are your orders – over the top with you …