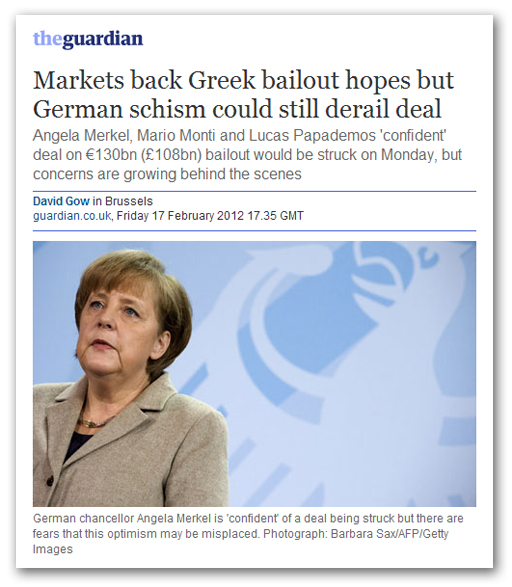 All those resources, the gifted staff, the fact-checkers and the budget of millions, and this is the best they can do? I don't know whether to weep or laugh.

Yes dears, you who are so wedded to the soap opera. There is a schism … between Greece, the commission and France on the one side and, on the other, Germany, with Finland and Holland – plus other as yet undisclosed backers.

Angela Merkel, Mario Monti and Lucas Papademos are "confident" of a deal on Monday? Yeah, right! According to Mr Monti's office in Rome, as copied off the press release by the agencies and then rehashed by The Guardian "man-on-the-spot" … in Brussels. This, ladies and gentlemen, is how news is made.

And there are "concerns growing behind the scenes"? You don't say! I'm shocked, shocked, I tell you! What on earth would we do without our wonderful media to keep us informed?

It tells us that, in Berlin officials "rebutted" widespread reports of a growing rift between Merkel, who backs Greece staying a member of the euro, and Schäuble … unsurprising, because the only report of a "rift" is the Financial Times relying an unnamed "Eurozone official".

Then they then go to another part of the opposition, Francois Fillon, French premier. He "effectively confirmed divisions within Berlin". But he urged France's allies "not to play with" a Greek default and strongly backed Athens: "The Greeks have promised very important reforms. The Europeans now have to keep their commitments", he is cited as saying.

Seriously, this is actually how news reports are cobbled together. This is what thousands of people will be reading at their breakfast tables this morning and, worst still, believing it. Perhaps it is just as well we don't have to rely on the media for any serious news.