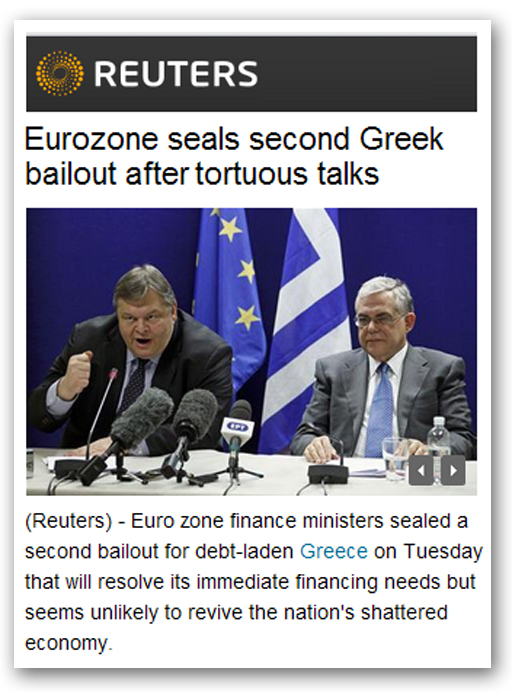 "We have reached a far reaching agreement on Greece's new programme and private sector involvement that would lead to a significant debt reduction for Greece and pave the way towards an unprecedented amount of new official financing ... to secure Greece's future in the euro area", says Luxembourg's Jean-Claude Juncker, at the end-of-charade press conference.

The official Eurogroup statement is here. "We reiterate our commitment to provide adequate support to Greece during the life of the programme and beyond until it has regained market access, provided that Greece fully complies with the requirements and objectives of the adjustment programme", say the "colleagues".

Off-stage could be heard banging, shuffling and muffled screaming from the fat lady, as she was bound and gagged, and bundled out the back door into a waiting van.

Already, Felix Salmon of Reuters calls it "the improbable Greece plan". His view is that the plan assumes that Greece's politicians will stick to what they’ve agreed, and start selling off huge chunks of their country's patrimony while at the same time imposing enormous budget cuts. Needless to say, there is no indication that this will happen, nor that the Greek people will tolerate such a thing.

Here then is a man saying that the deal could easily all fall apart within months; the chances of it gliding to success and a 120 percent debt-to-GDP ratio in 2020 have got to be de minimis.

Earlier, in the forum, we wrote: "there will be the appearance of an agreement ... which will then take a few weeks to unravel ... the game this time is to get themselves past the 20 March crisis. Then there will be another day, another crisis". Merkel's only option, we wrote even earlier, was to buy time.

Now Salmon writes that Europe's politicians know the deal must fail. "But at the very least they're buying time: this deal might well delay catastrophic capital flight from Greece, and give the Europeans more time to work out how to shore up Portugal if and when that happens".

Wishful thinking that is, but for the moment it is the only game in town. "We continue to believe that Greece can be saved. Or at least we continue to say so", says one Eurocrat, according to The Economist.