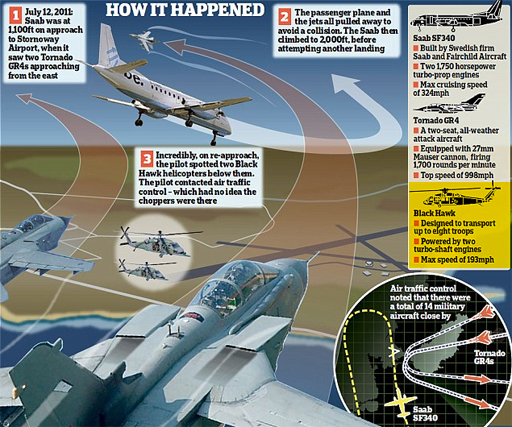 The Daily Mail is breathlessly reporting how a "tiny passenger plane" was seconds from disaster after being "'attacked' by Tornado jets and Black Hawk helicopters in mock war game".

The report is accompanied by a graphic (above) and photographs of the "helicopters" with what looks suspiciously like photoshopped RAF roundels and Union Jacks on the tail (below). The colour scheme of the machines looks very similar to that used by the RAAF (but see "update" at the bottom of this page), although these aircraft do not have hi-viz roundels - and neither do RAF machines. 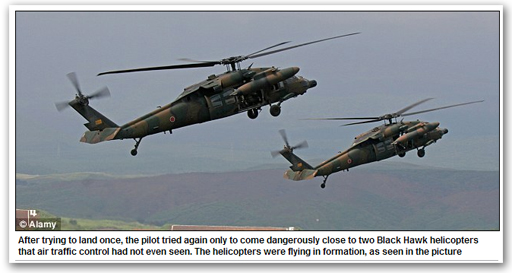 What makes the picture and the accompanying report even more suspicious, apart from the wrong colour scheme and the different-sized roundels on each machine, and the minor fact that the RAF does not have any Blackhawk helicopters, is a reference to the official report of the incident, on which the news report is based. With my emphasis, the relevant (edited) part is reproduced below:


THE SF340B PILOT reports flying a scheduled passenger flight to Stornoway … on the instrument approach, 4xTornado ac called ATC to say they were E of the airfield. ATC advised them that a SF340 ac was on a visual final approach to RW36 and to remain to the E. At 1100ft on the approach they saw 2 grey Tornado ac straight ahead and coming towards them. A few sec later … the Tornado was then seen to pull up and away from them aggressively … They … then saw two black Hawk ac underneath them also manoeuvring aggressively …

And there we see the error in the Mail report. The ace girlie journalist Katie Silver, obviously happier with more complex reports such as this and this, has misread "black Hawk" – an RAF advanced trainer (below) – and assumed it to be "Blackhawk", as US-built tactical transport helicopter (crew 4, capable of carrying 14 troops - not eight, as the Mail suggests). Gallimaufry & Chips has more, but what must be doubly embarrassing for the Mail is that even the BBC got it right. But then, this is the paper that relies on Max Hastings for its military expertise – so what do you expect?

UPDATE: The expertise of our forum is hugely impressive. The helicopters pictured are Mitsubishi UH-60JA of the Japanese Ground Self Defence Force – a licence built version of the Blackhawk. Do the roundels look doctored on the Mail pics? I guess not, from looking at the original.