The fat lady clears her throat 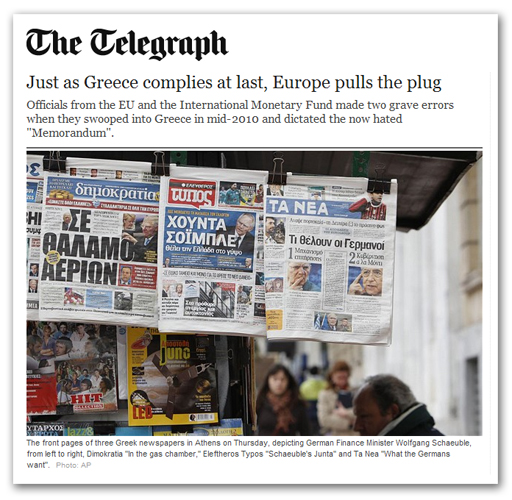 The rhetoric has turned poisonous, says Ambrose as he catches up with events. He judges that Berlin, Helsinki and The Hague show every sign that they intend to eject Greece from the euro whatever it now does, calculating that the eurozone is at last strong enough to withstand contagion.

Theoretically, we should be seeing a resolution on Monday, when the Eurogroup finally meets. But Dutch minister of Finance Jan Kees de Jager is indicating that the Netherlands will block the bailout.

From that source, we learn that, even if everything goes well, Monday will only deliver a "preliminary agreement", creating a parliamentary reservation for the Netherlands, Germany and Finland. The German parliament debates the issue on 27 February and then, as we reported earlier, there is the European Council pencilled in for 1 March.

The Financial Times, however, sees in the German position a split, with Schäuble pushing to let Athens default while Merkel is firmly against.

For this, the paper relies on unnamed German and eurozone officials – and I don't buy it. But it does helpfully add that the Monday meeting is going to cover only the restructuring of Greece's sovereign debt - and the provision of a bridging loan until April is also under consideration.

Others, though – in addition to the Economist - are still totally in fairy land. This hilarious account from Reuters has Jim Paulsen, chief investment officer at Wells Capital Management in Minneapolis, preening himself on getting " … this incredible flow of good data".

The eurozone, we are told, is putting the finishing touches to a second bailout deal for Athens that could be approved on Monday, moving closer to averting a disorderly default by Greece. "People are increasingly of the opinion that although Europe will continue to have flare-ups, it's not likely to become a calamity for the world economy", Paulsen says.

On this, then, we have to turn to ZeroHedge. Its view is:


While next to impossible, now may be a good time to ignore the constant barrage of meaningless noise and flashing red headlines, which not only are contradictory but prove that Europe is literally making it all up as it goes along. Today is a great case in point of a tangential detour which does nothing to change the reality that Germany no longer wants Greece in the Eurozone …

Not yet do we hear the dulcet tones of the fabled fat lady, but somewhere in that lot, we can hear her clearing her throat for her warm-up routine. It can't be long now. Despite that, though, we need to be careful what we wish for. It might be worse than we think.