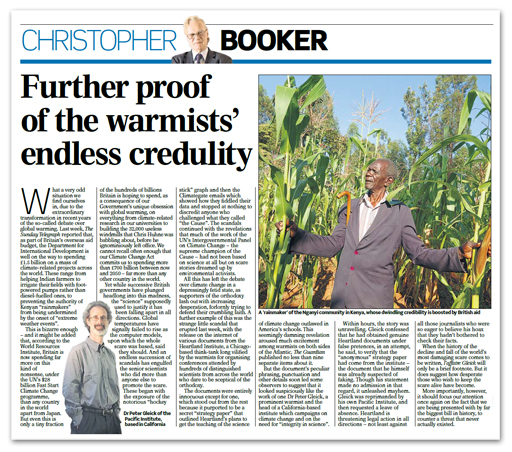 Booker today offers what amounts to a tour de table on the state of play on "the so-called debate over global warming" (above – click to enlarge).

The point, of course, is that the warmists had their debate and lost it. Now they want a replay. But what perhaps is being underplayed is that, while this little spat is over millions of dollars, the amounts spent (and earmarked for spending) on global warming by governments and advocacy groups is in the hundreds of billions.

Not least of the sums is the $28.222 billion for so-called fast-start finance, but, says Booker, we cannot recall often enough that our Climate Change Act commits us to spending more than £700 billion between now and 2050 – far more than any other country in the world.

Thus, when the history of the decline and fall of the world's most damaging scare comes to be written, l'affaire Gleick will only be a brief footnote. But it does suggest how desperate those who wish to keep the scare alive have become.

More importantly, Booker concludes, it should focus our attention once again on the fact that we are still being presented with by far the biggest bill in history, to counter a threat that never actually existed.