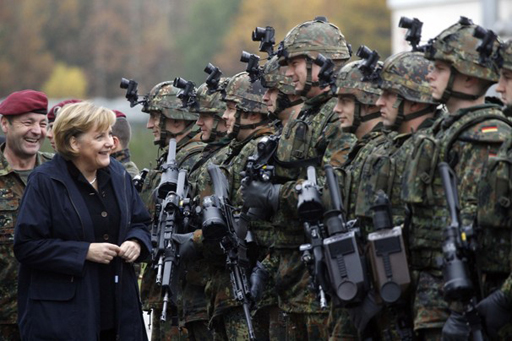 Mary Ellen Synon thinks that Merkel is deliberately trying to force Greece out of the eurozone – with Portugal and Ireland to follow.

This actually makes sense. Furthermore, it reflects not strength, but the weakness of an electorally-challenged chancellor, desperately trying to cling on to power at home. But it goes far deeper than that. In my mind, she is trying to reconcile the now-traditional Euro-centric stance of her nation with the phenomenal domestic stresses created by Germany's membership of the European Union, and all that goes with it.

These now have her people objecting to their wealth being squandered on basket-case economies yet, within the post-war paradigm, Germany is only allowed to exercise its power within the context of the European communities. Her military and economic might are constrained (mainly) by France and the other member states, within the matrix of the European Union. That is the primary purpose of the EU.

Still burdened by national "war guilt", Merkel cannot break out overtly. She has to be seen as a "good European". She must be seen to be supporting the euro and, more generally, the European Union. But the EU has become a prison. To develop further, Germany must break out its destructive embrace. And this is what we are seeing. It being done by creating the conditions for the destruction the single currency, or a major re-alignment, without Merkel leaving her fingerprints at the scene.

Such a "game plan" presents a contrast with the perceived wisdom. In this scenario, other countries leave of their own volition, or are forced out by the "market" or other extraneous pressures. It eventually leaves an independent Germany (or a Greater Germany grouping) free to follow its preferred domestic policies, without having been seen to be responsible for the break-up of the European construct.

Merkel, therefore, is the great eurosceptic. It will not be Cameron's Britain that will bring down the European Union, but Germany, escaping its shackles and redefining the post-war settlement. That is the game being played. Germany wants "out", and the rest of Europe is trying to keep her in.