An ever decreasing circle of relevance 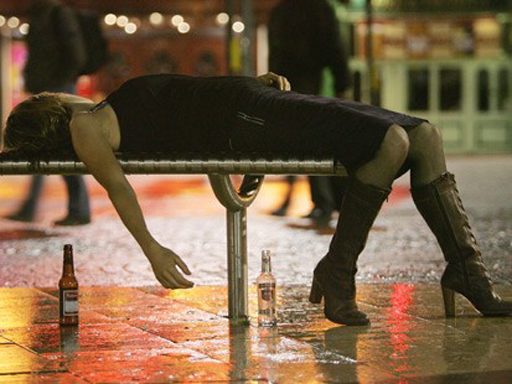 It seems that I am not the only one puzzled by the running order of stories in the MSM today and the prominence given to The Boy's hysterie du jour - the "prime minister's agenda to curb excessive drinking".

Boiling Frog shared our puzzlement, having previously remarked on how the MSM had given so much prominence to Bafta footage and the death of Whitney Houston, even as Athens burned. These comments were based in part on a post by The Talking Clock, leading TBF to conclude that the MSM "is retreating rapidly into an ever decreasing circle of relevance".

One might also ask why it is that Cameron has chosen to make noises about "binge drinking" at this particular juncture. With the European, if not global, economic system about system about to implode, one might think that there were more important things, with which to concern himself.

It is researcher and commentator Dennis Ambler in one of his invaluable e-mail circulars, however, who points out that this is primarily a UN agenda. To that extent, The Boy is simply responding to his tranzie masters – and in so doing keeping the more important issues off the front pages, as an obedient media cravenly follow his lead.

The media itself is much in the news these days and, by coincidence, we saw recently the retirement of Tom Curley, Associated Press chief, who was then invited to reflect on the state of the media by The Guardian.

Curley sees one of the main problems besetting the media as the speed of the news cycle – defined as the "period of time when all the people interested in a story had access to it". When he was a cub reporter in the 1960s, he estimates it was 12 hours. Latterly, "until about 11 September 2001, it was three hours," he says. But, he adds: "Now it's 30 minutes. You might say if you are a certain age – with Twitter and Facebook and all that type of stuff – it's three minutes".

Reflecting on the downturn in newspaper revenues and the enormous contraction in the US newspaper industry, his concerns have turned to seeking how to attract revenue from the web. And, in so doing, the man seems besotted with speed. "The purpose", he says, is to get in step with the social media flow of the news. In the past you would update a story 12 times in a 24-hour cycle. Now it's possible to update it 200 times, and each time you do that on the web it drives traffic".

Before retiring, Curley had considered moving over into academia and, had he done so, one of his research papers would have focused on what he perceives to be the failure of financial journalism in covering the economic downturn.

"I don't think we did a good enough job, and we may not be doing as good a job as we should be on the salaries and people who have been basically taken over by the taxpayers and are still managing to pay themselves large sums of money", he says.

But what he does not concede (although he might have been prevailed upon to do so), is that this failure to do "a good enough job" extends well beyond financial journalism. Rather than speed, he might therefore consider breadth, accuracy and relevance - reporting on stories and issues that really matter.

Almost on cue, we then find, via The Boiling Frog again, the BBC catching up with the story of Greece being forced out of the eurozone - nearly three days after we first broached the idea, and then only because a Greek politician had complained that this was happening.

This should have been lead item on the front pages of every newspaper that has pretensions to that title. Instead, the focus on soft news, trivia and politician-driven agendas, is driving readers away and the likes of us to distraction.

Perhaps not trivia, but we saw a few days ago a complaint by Trevor Kavangh that Sun journalists had been treated like suspected terrorists by the police. He may have been right to do so, but you would have to have a heart of stone not to smile, at least a little bit.

Given the abject failure of the media to do its job properly, it has been taking money under false pretences for years - and for many journalists, locking them up is the least of their desserts. When they start producing relevant reports on real news again (insofar as they ever have), then we might feel some sympathy.