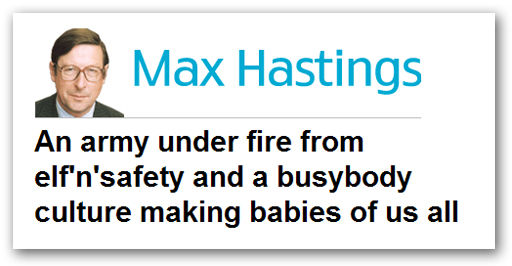 One of the things I particularly enjoyed about Overlord, Max Hasting's book about the 1944 Normandy landings, is the way he interweaves the narrative with short dissertations about the equipment used in the campaign, including analyses of the many shortcomings.

There, I though, was a man who understood (to a degree) the relationship between the fighting performance of armies, and the equipment with which the were provided – issues especially relevant in Normandy where the Allies had failed to produce a tank which could match German armour or deal with the much-feared 88mm flak/anti-tank gun.

But if the man had then (in 1984) the glimmerings of understanding, any lessons he learned during the writing of his book, he seems to have unlearned as old-age, pomposity and grandeur have overtaken intellect.

This is evident from his latest piece in The Daily Mail, where he deplores the encroachment in the Army of what he calls the "elf'n'safety and a busybody culture" which, he asserts, is making babies of us all.

Hastings's cri de coeur rests in turn on Gen Peter Wall, the current CGS, who last week "hit out" at the "zero-risk culture" which, he said, had "fuelled unrealistic demands that no British blood should be shed on battlefields".

Human rights lawyers, Wall asserted, were among those who had created an "expectation" that troops should not come to harm in war zones. The spotlight shone on the Armed Forces in Iraq and Afghanistan had exposed "a variety of awkward ethical, legal, human rights and equipment issues".

But, he added: "There will be an expectation in some circles in society that the sort of zero-risk culture that is understandably sought in many other walks of life ought to be achievable on the battlefield".

Nevertheless, he said, the public must be prepared for lives to be lost in future conflicts. Despite the equipment lessons learned in Afghanistan, the "operating risks" would be greater on a future mission where the UK was forced to put "boots on the ground" in an unknown theatre of war.

Picking up on that theme, Hastings tells us that Wall's dismay "is widely shared in the armed forces, and among senior veterans". Name dropping in the way that he so grandly does, he then tells us he heard Gen Michael Rose, who commanded the SAS in the Falklands, "deplore the new ethic created by coroners, human rights cases and media pressure, which he believes to be gravely damaging the Army as a fighting service".

Now, there are few people who will disagree with the general premise, that war is dangerous and soldiering entails risk. Further, it comes as no surprise that, when soldiers make a career out of going to strange, foreign places in order to kill people, there is always a chance that they are going to come back with bits missing, or in a body bag.

However, on the basis of what he is told by Army worthies, Hastings decides that we, the public, are expecting too much. Although the Army has had to fight its recent campaigns amid a deplorable shortage of helicopters, he says, we should ignore much of the claptrap about alleged equipment failures: our soldiers in Afghanistan are the best-equipped Army Britain has ever put into the field.

If their kit is not perfect, he informs us, it is because nothing ever is. If commanders sometimes make mistakes which cost lives, and earn magisterial rebukes from ignorant coroners, this is because young men do make mistakes, and in war the price is paid in blood.

And that is the word from Hastings. If we are to take him at face value, concerns about the Snatch Land Rover, the pathetically inadequate Vector, and the stupidity of the Jackal, are misplaced. Pointing out their deficiencies is "claptrap", and commanders (many of whom – and especially those making decisions on equipment - are not that young) are entitled to make mistakes.

The tragedy of this mindset – and that it clearly is – is that it neglects two important issues.

Firstly, it fails to allow for that fact that people are reasonably tolerant of military casualties, although that tolerance reduces in what might be termed an "unpopular" war. What primarily they are concerned with is what are perceived to be unnecessary casualties, caused by avoidable errors, or inadequacies in equipment.

Secondly, it neglects the very essence of counter-insurgency warfare, where the objective is not the capture of territory but the "hearts and minds" of the indigenous population in the area of operations. In thus type of battle, though, the enemy is also fighting for the same objective, but that includes the "hearts and minds" of the home population, from which their opposing troops are drawn.

Thus do insurgents, as a matter of course, target soldiers specifically to cause casualties, the purpose not to achieve any direct military objective but to influence public opinion and reduce support for the war. As with Viet Nam, they know full well that wars are won on the home front, when "permission" to fight is withdrawn and the war becomes politically unsustainable.

In such circumstances, it is incumbent on military commanders to make "force protection" a major theatre priority. If soldiers' lives are the currency of war, where every death is a victory for the enemy, keeping deaths to an unavoidable minimum is a necessary military objective.

Above that though, no commander can afford the luxury or taking casualties that are perceived to be preventable – and that really is the issue. No one, surely, can argue that the deployment of inadequate vehicles to Iraq and then Afghanistan was anything other than a mistake, and that lives were lost unnecessarily.

There is, however, a third and perhaps even more important element. In the context of both Iraq and Afghanistan, enemy tactics involved the extensive use of IEDs. The effect of this on the counter-insurgency forces is to reduce tactical mobility, and to force local commanders to limit the scale of operations to keep casualties to within "acceptable" bounds.

In this context, force protection is not an optional extra, an add-on luxury to be supplied once other operational needs have been satisfied. It is a sine qua non of modern, discretionary operations. 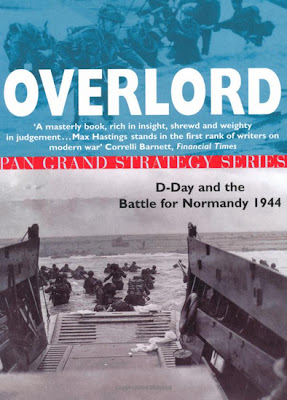 Behind all this, though, one sees a deeper, more sinister issue. With a number of human rights cases pending, and an appeal due in the Supreme Court over the Snatch Land Rover, it seems that the Army and its apologists are indulging in high-level back covering, to conceal or mitigate egregious failures in the supply of equipment.

There, I have no truck with this "lessons learned" culture, which seems to be the military (and official) response to the supposed "elf'n'safety and busybody culture". Any number of mistakes are permissible, it seems, as long as the lessons are duly learned, and the mistakes are not repeated … until the next time, when lessons have to be learned all over again.

By any measure, sending Snatch Land Rovers into Iraq was a bad decision. Keeping them there, and taking so long to provide mine/ambush protected vehicles, was criminal folly. Deploying both the Snatch and its replacement, the Vector, to Afghanistan, was the height of stupidity.

Demanding that troops are better equipped to deal with predictable threats, before they go into theatre is not "claptrap". Nor is demanding emerging threats to be quickly recognised, with countermeasures rapidly supplied, unreasonable. It is common and military sense.

Hastings does us and the military no favours by taking his current line. He should know from his previous writings how important it is to supply the correct equipment to our armed forces. He is going backwards, a case here of lessons unlearned.

In the foreword to Overlord, he cited Basil Liddel Hart, who had suggested that the Allies had been strangely reluctant to reflect upon their own superiority in Normandy and draw some appropriate conclusions about their own performance. "There has been too much glorification of the campaign and too little objective investigation".

When it came to the lamentable performance of British armour, Hastings observed that "the British Authorities were at pains to stifle any public debate about the shortcomings of their tanks, although these were well known throughout the British Army".

In the House of Commons, the government was constantly challenged by Labour MP Richard Stokes, only to have his entirely justified complaints dismissed with the assurance that "public discussion of this issue was not in the public interest". Field Marshall Montgomery himself quashed a succession of complaints and open expressions of concern, writing at the time of such reports being "likely to cause a lowering of morale and lack of confidence among the troops".

Hastings then reports that, "The government lied systematically, until the very end of the war, about the Allies' tragic failure to produce tanks capable of matching those of the Germans".

It seems to me that Hastings needs to re-read his own book.