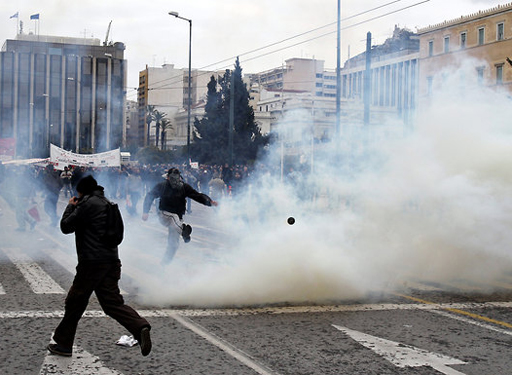 … but not for very much longer it would seem. There is definitely a sense that we are moving to the end game. Prime minister Lucas Papademos had offered new austerity measures worth €3.3bn to secure the euro lifeline, but that was not enough to assuage the Gods of Brussels.

Before they deliver unto the creditors of Greece the €130 billion, they want another €325m in "cuts". Papademos has been instructed to get the €3.3bn programme endorsed and come up with a plan for the new cuts – to plug a gap in this year's budget – by Sunday.

George Karatzaferis, a Greek coalition leader, spoke of national humiliation and said he would not accept the new cuts, adding that Greece was labouring "under the German boot". The people are being given a choice between catastrophe or catastrophe.

This is not going to end well.