When is a deal not a deal? 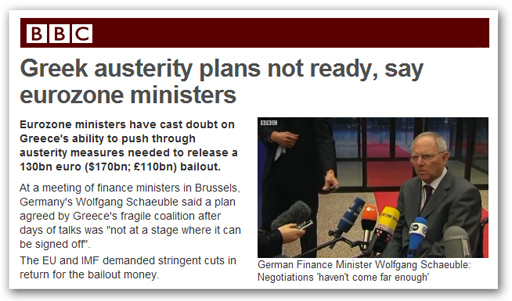 When, it's a Greek deal. According to confused media (or confusing?), where events have been overtaken by events and headlines are all over the place, Greek political leaders have agreed to more austerity measures "that could pave the way for a new bailout and debt-restructuring deal".

The trouble, according to these and many other sources, is that the "colleagues" don't believe them, so the euro-zone finance ministers meeting in Brussels were not prepared to sign off on the bailout. They want "proof" that the Greek government is ready to deliver on past promises - and to implement new ones.

For these and many other questions, there is a paucity of answers. There is evidently a long way to go yet, as even the BBC seems to agree (above), with its interview telling us that all the finmins are prepared to do is agree the conditions for the bailout. The soap opera looks as if it will continue.