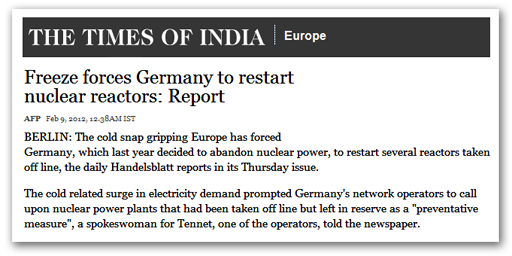 We saw recently the utility of wind power in the UK (not), when installed capacity of 5.2GW was able to deliver a meagre 51MW (metered), contributing a pathetic 0.1 percent of the electricity generated.

In the UK, it was coal that took the load but, as the freeze continues to grip Europe, spare a thought for Germany. With an installed capacity of 27.2GW in 2010 and the addition of another 2GW (approx), last year, it has recently been forced to restart some of its nuclear reactors, after having imported power in December from neighbouring Austria to stabilise its network.

Thus, we learn from The Times of India, via the AFP agency, after the news had been reported in the German daily Handelsblatt. It was also reported by Russia Today and Press TV, although British media seem to have ignored the story.

However, it now seems that the nuclear element of the story might be wrong. Instead, courtesy of the Vancouver Sun, again via AFP, we get a revised story that the reserve generators are a coal-powered plant in southern Germany and two plants in Austria. A [coal-fired] station in the southern city of Mannheim, is also in use.

That is bad enough but, for the warmists, it gets even worse. Although we reported last January that an additional 11GW of coal-fired capacity was coming on-stream in Germany "this year or next", we now learn from the Union for the Co-ordination of Transmission of Electricity that there will be a net addition of 20-22 GW of fossil fuel-fired capacity by 2013.

Domestic hard coal consumption by EU nations through the first six months of 2011 was 64.9 million metric tons, up from 59.7 over the year-earlier period, and Germany was on track to import up to 48 million metric tons of coal for 2011- a total expected to increase as nuclear power capacity is phased out. Eight of 17 reactors have already been switched off and the nine reactors currently on line are due to be turned off between 2015 and 2022. One assumes that these will go only once the coal capacity is on-line.

Germany is often cited as the lead country in Europe for renewables and if that country is having massively to add to its coal-fired generation – and import electricity - despite having nearly 30GW of wind capacity, any idea that we can do differently with less than a fifth of the wind capacity seems to be fantasy.