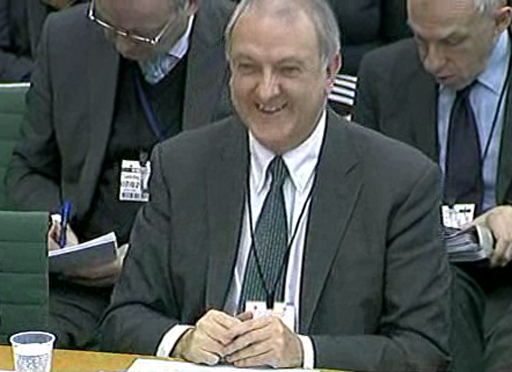 The clinics which fitted faulty PIP implants have a "moral and social duty of care" to provide aftercare to their clients. So says professor Bruce Keogh, medical director of the NHS (pictured), giving evidence to the House of Commons Health Select Committee last week.

He then acknowledges that the government has no powers or mechanisms to enforce that "duty" on private sector providers. Chairman Stephen Dorrell asked whether there was any opportunity for legal redress, and got an extremely equivocal response from Keogh.

Compare and contrast this with the stance taken by professor Laurence Kirwan, Harley Street plastic surgeon and Fellow of the Royal College of Surgeons.

Kirwan has taken exception to guidelines Keogh sent to GPs, NHS Medical Directors and plastic surgeons last month. Under the heading "Criteria for replacement of implants at NHS expense" the Department of Health's letter refers to private patients offering to pay for replacements from the NHS because they have been "failed by their providers".

"We have received a number of queries from patients with PIP implants supplied by private providers where the provider has failed in its duty of care", says the letter which was signed by the Chief Medical Officer, professor Sally C Davies.

But, says prof Kirwan, "I will not endorse the statement that the private provider has 'failed in his duty of care' because he has placed a perfectly legal implant approved by MHRA in a completely ethical and legal setting as did the NHS". He adds: "The fault lies with the regulatory agency and they should take full responsibility for removal as well as replacement".

Interestingly, not once throughout the Health Committee proceedings did europhile Stephen Dorrell mention that the CE marking system was part of the fabled Single Market, or in any sense suggest that the regulatory authorities bore any responsibility, even though it was admitted that there had been a "regulatory failure". He steered the committee very firmly to focus on the responsibilities of the clinics which had provided implants.

Back, in Brussels health and consumer policy commissioner John Dalli then had the nerve to call on member states "for immediate action to be taken at national level to ensure full and stringent implementation of the current legislation on medical devices".

However, in a de facto admission that the current system was defective, he said that the priority was "for the Member States and the Commission to act together to tighten controls, provide a better guarantee of the safety of medical devices and to restore patient confidence in the law that protects them".

Dalli has thus outlined his proposals for a joint plan of immediate measures in a letter written to the health ministers of EU member states, asking for their full co-operation in beginning work without delay.

This is on the basis of an earlier report from the commission, asking for "further scientific study" and drawing "first lessons from the recent fraud on breast implants".

Against that background, Keogh on the one hand is determined to contain the impact of this scandal on the resources of the NHS, while Dorrell seems most concerned that the clinics should live up to their "obligations".

Thus do they seek to pass the buck, so who is there to point the finger at the EU and its responsibility for a failed system, and at the French government for its failure earlier to detect the fraud?

And what about these europhiles who are so keen on the Single Market, which includes a single market in medical devices? Where is the "moral and social duty of care" of these people, who so easily seek to dump the responsibility on clincs who relied on the authority of the CE marking?

The attitude of Dorrell seems to me to sum up the europhile tendency – everybody is responsible for their actions, except themselves. They immediately stand aside when there is any chance of blame coming their way. When there is a "regulatory failure", the private providers have a "moral and social duty of care", which requires them to remedy it. If that is not passing the buck, I don't know what is.