Tip of an iceberg? 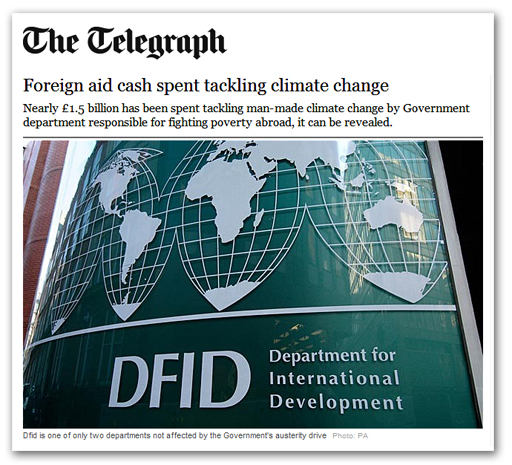 A piece in The Sunday Telegraph by Richard Gray, Science Correspondent, purports to give us spending data from the Department for International Development (DFID), "on projects which they say will either reduce carbon emissions abroad or attempt to deal with the effects of predicted changes in the earth's climate".

According to Gray, in the past four years DFID has spent £900 million on climate change projects with nearly two thirds of that being spent in the past financial year. A further £533 million has already been committed up to 2013. The biggest recipients, he says, are India and Indonesia, two countries considered to be rapidly emerging economies.

These figures, apparently, come from a Freedom of Information request, and "reveal" that total spending on tackling climate change overseas has increased from £61 million in 2007-08 to more than £883 million in 2010-11. In total £3.5 billion of public money has been paid out or allocated to projects addressing climate change abroad since 2007-08.

This is all very good stuff and, coming from this source, is eminently quotable – as a number of blogs and other groups are already doing. It provides good propaganda, not least to counter the increasingly bizarre claims coming from the warmists, about expenditure by those whom they insist on calling "deniers".

However, I suspect that not even DFID knows exactly how much money is spent specifically on climate change. Much of the funding is grouped under portmanteau projects, covering a wide range of issues, of which climate change is sometimes only a small part.

Furthermore, there is some reason to suspect the accuracy of what the government has told Gray. For instance, based on his FOI answers, he tells us that amongst the aid provided by DFID was a £4.7 million project in Indonesia aimed at helping the government there provide "more effective leadership and management of climate change programming".

Indeed there is such a project, and details of this and all the others can be found on the DFID website. However, while Gray has been told of a £4.7 million project, the website details give us £6.2 million, in order to ensure that the GoI (Government of Indonesia) "can provide more effective leadership and management of climate change programming to deliver emissions reduction and poverty reduction outcomes".

Interestingly Indonesia is very much in the frame and, if Gray has done nothing else, he has certainly alerted us to that. Looking wider, we thus learn that in December 2009 DFID exchanged letters with the Government of Indonesia agreeing to a five year programme focusing on climate change over 2010-15, with a budget of £50 million.

The intention is that from 2011 onwards DFID focuses exclusively on issues of climate change in Indonesia, and delivers this by forming a joint UK Climate Change Unit with other government departments located in the British Embassy and withdraws from development work in other areas.

That UK Climate Change Unit (UKCCU) was launched on 6 April 2011, with the press release informing us that this cross-government unit would deliver the UK's climate change goals in a vitally important context.

Thus we see multiple additional projects, such as Promoting Low Carbon Development in Indonesia with a budget of £5,000,000. There is the  Indonesia Low Carbon Growth Project for £1,500,000, the Multi-stakeholder Forestry Programme at £2,000,000, Support to Climate Change Programme in Indonesia at £1,199,735, and the Rapid Response Facility on Climate Change at £500,000.

With a few others, that brings the known total to just under £17 million already spent, leaving – presumably – another £33 million in the kitty for the next three years.

But all of this pales into insignificance against the bigger picture. Go to the DFID website, hit the "project search" tab and then key in "climate change". You will get 301 projects, the first being the Environmental Transformation Fund, with a budget of £554 million, of which only £39.6 million has been spent.

Adding these four, we already have more than £1 billion, but the projects get cheaper as you go down the list. You will love this one though, for a mere £13,999,992, the object being to fund DFID secondments to the EU:


To enhance the capacity of the European Union in policy analysis and programme management in key areas. These include Maternal and Child Health, Climate Change, Wealth Creation, Water and Sanitation, and issues focussing on Fragile States, Conflict Prevention and Resolution. In addition it will provide support for stronger overall Evaluation and Monitoring of EU spend. The Programme will second approximately 25-30 high calibre DFID staff (Seconded National Experts - SNEs) to the European Commission and related organisations in Brussels and Luxembourg, EU delegations in developing countries, EU Presidencies, and to the new European External Action Service (EEAS) of the European Union. The National Experts on Professional Training scheme (NEPT) will also provide short term opportunities in the EU (Brussels) for staff to get experience and knowledge of how the EU manage their development programmes.

So, nearly £14 million of our foreign aid budget goes to sending British bureaucrats to commune with Eurocrats in Brussels and elsewhere. The starving children of Sudan, to name but one location, will be delighted.

Obviously, Gray's work is but the tip of the iceberg, adding to his earlier work in an area already visited by Booker and myself on several occasions. Given a chance (unlikely though that is, with current pressures), we'd like to hack further into this iceberg. Perhaps DFID could give us a grant?