Thrown to the wolves 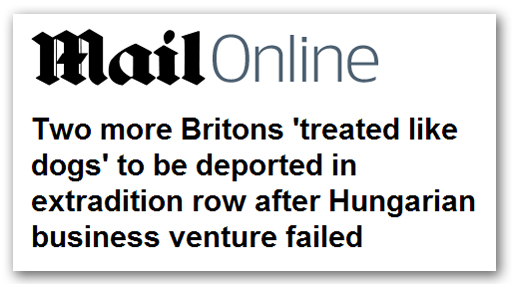 Peter Hitchens has a go at our extradition agreement with the USA, which I thought left the issue rather unbalanced. It is all very well talking about Christopher Tappin, and how badly he is being treated - and I would not disagree with the points made. But what about the European Arrest Warrant?

Then, just for once, the Mail does the right thing, picking up on the case of Michael Turner and Jason McGoldrick who will be flown to Budapest today. There, they will be handed over to the Hungarian authorities on charges relating to a business venture that failed seven years ago.

Turner and McGoldrick have already spent four months held without charge in a notorious prison in Hungary after being handed over by the UK government in 2009. The pair were later released and allowed to return to Britain but now have to go back to face a fraud trial, over an issue which, in the UK, would usually be dealt with as a civil case.

Nevertheless, the issue, as always, is that British judges should have first bite of the cherry. There must, of course, be provision for extradition, but only after a British judge has decided there is a case to answer, and that a foreign trial is both necessary and without a reasonable alternative.

As Turner now observes though, "We feel let down by the British government for allowing us to be extradited on such flimsy evidence … When our extradition hearing was heard at the High Court a few years ago, the judge said he was being led by Brussels".

God help them though – and us – when they are represented by Tory MP Richard Drax, who is calling on the government urgently to "reform" the "European Extradition Treaty".

Drax, rightly says that Turner has been the victim of an outrageous injustice and that the system "is a judicial mess of scandalous proportions". We can even agree with him when he says, "It is quite understandable Michael's loss of faith in this country's ability to look after her own".

But then the fool wants to reform an unreformable system. That is the ultimate betrayal.