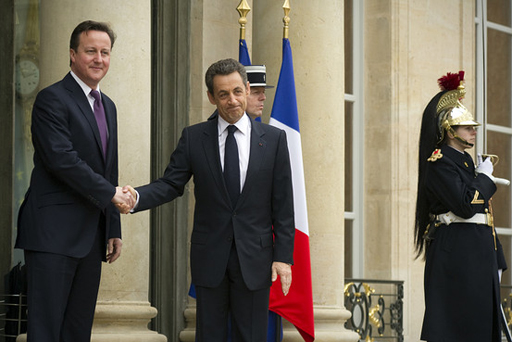 We saw it coming in November 2010 when Liam Fox announced a new deal with the Kermits in the form of a Combined Joint Expeditionary Force (CJEF) of around 6,500 troops from the France and Britain under a 50-year deal for closer military "co-operation".

More recently, we've seen plans for an integrated carrier fleet (when we have a carrier to integrate) and now, in the next phase of defence integration, we now see Cameron and Sarkozy agreeing to accelerate plans to create a joint control and command centre for future military operations.

In a logical and continuous development of Blair's 1998 St Malo agreement (which was based on initiatives started by John Major), the two leaders also agreed to push ahead with the next phase of plans to build a new generation of UAVs.

This is the EuroMALE project which the French have been pushing since 2006, and represents a move away from US and Israeli technology in a field where neither the French nor the British have covered themselves in glory.

And if this is not bad enough, it gets worse. The "real and substantial" co-operation on defence discussed today will cover not only the new command centre and UAV production, but also nuclear weapons.

Speaking alongside Sarkozy at a press conference in the Élysée Palace, The Boy – without so much as a blush – told us all: "I don't think that there has been closer French-British co-operation at any time since the Second World War, not just in Libya but also on the vital issues of Syria, Iran, Somalia and defence co-operation".

We know The Boy is not very good at history, but this puts him into a different league. "The defence co-operation is real, it is substantial, it is going to make a big difference to the military capabilities of both Britain and France," he says. "We are similar-sized powers, with similar-sized armed forces, with similar ambitions.

"It is partly about new capacity - the investment that we are going to make in a drone programme. It is also about making the most of our existing capacity, as we will be combining and using it together. It is also about operational capacity and ability to take action together".

"If you look at the detail of what Britain and France are doing together on defence co-operation, not just building new drones together but co-operating on the most sensitive dossiers of all, including nuclear, I think that demonstrates an incredibly strong relationship based on our countries' shared interests".

Thus we have the next stage in the play. After running down our own armed forces, to the state that they are barely if at all capable of independent operation, our masters then enter into defence agreements with France, the Trojan Horse of European defence integration.

The Camekozy is born. The betrayal continues.