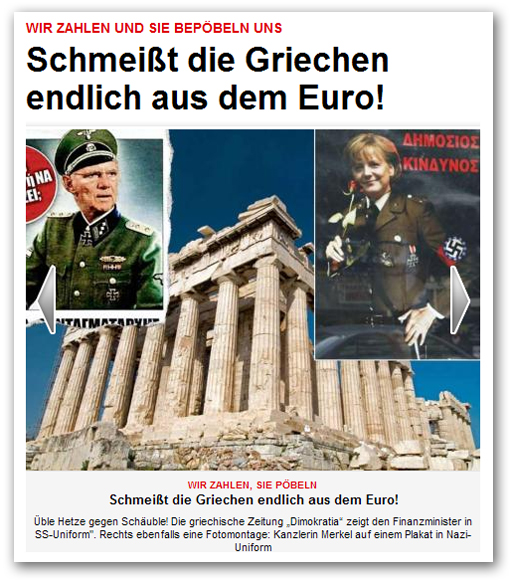 With Germanophobia never far from the surface in European politics, Greek politicians and their media have been shamelessly playing the "Nazi" card, to the applause of commentators throughout the world. Too many people – many of whom should know better - have been only too happy to believe the narrative of the German "steamroller" pitched against the hapless Greek people.

Bizarrely, even though it has emerged that the German solution to the current crisis is for Greece to leave the euro, and many of those self-same commentators argue for exactly the same outcome, Merkel gets a swastika armband and now finance minister Schäuble is dressed in an SS uniform.

It is, of course, not part of the media narrative to cast events in any other way, the net effect being to play to the propaganda of the EU commission and their Greek puppets, reinforcing the pressure on Germany to finance the bailout, and keep the euro intact.

At last though, it does seem as if the Germans have finally had enough, today's Bild running a story headlined: "Throw the Greeks finally out of the euro", complaining that, "We pay and they insult us" (pictured above).

But, indicating just how far adrift is the Nazi rhetoric – playing into the hands of the EU - the paper goes on to note that all Greek politicians want to stay in the euro, to which effect they are forcing the pace on harsh austerity measures. It is the German politicians who are saying that the "stubborn Greeks" have no future with the euro.

Thus in a cross-party alliance, we see Klaus-Peter Willsch of the CDU saying: "We must stop the tragedy. Greece in the Euro zone is no prospect of economic recovery", with Frank Schaeffler (FDP) warning that the protests might trigger a civil war.

It is then Veronika Bellmann (CDU) who says that everything the critics have predicted has occurred. She adds: "the ailing administration, the corrupt tax system and an unfit and unwilling political class are not a basis for structural reforms". And now, she warns, this is beginning even "to shake the democratic nature of the country".

What thus comes over is the very opposite of the legend we are being offered, with German politicians genuinely concerned at the fate of Greece, saying exactly the same things that British eurosceptics have been urging. Nor is this a question of throwing Greece to the wolves. CSU General Secretary Alexander Dobrindt, warns that: "We must prepare ourselves for the event that Greece does not implement the promised reforms".

But, far from being the heartless "Nazi invader" intent on dominating the country, he says that there must be a "contingency plan" for when Greece "escapes" from the euro, with the preparation of "an EU-Marshall Plan for the redevelopment of Greece".

All of this points to one inescapable conclusion: the Germans are the best friends the Greek people have right now. The people are being sold down the river by their own corrupt politicians, with the support (and instruction) of the EU commission and their "troika", whose only concern is the integrity of the euro, irrespective of the pain it causes.

When we look at the media at large, therefore, we have to say that never in the field of euro-reporting have so many got it so plain wrong. But then we see how useless they have become, and cannot be at all surprised.

COMMENT: "HAIL THE MSM" THREAD
Posted by Richard at 10:06