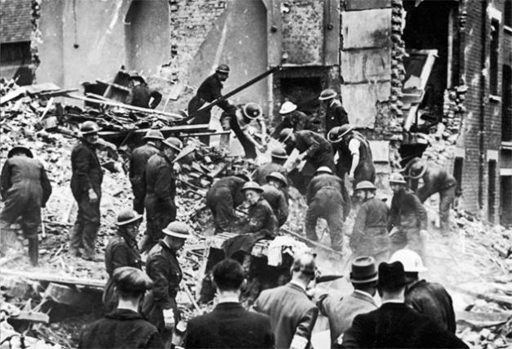 I spent some time at Bradford University this afternoon, reading copies of Reynolds News from 1940. This important newspaper was, at the time, owned by the Co-operative Society, and reflected a strand of left-wing thought which is rarely given much of an airing today.

One of the reasons it has been airbrushed out of history is that there are only two complete collections in the country (and, therefore, the world). One is in Hendon, and the other in Bradford, on my doorstep. Neither collection has been indexed or microfilmed, and the papers can only be viewed by appointment, under supervision.

Typically, historians rely on the newspaper of record, The Times, and then tend only to look at the headlines on the main news page. Although that newspaper didn't then have a front page as such (it was used for adverts), I call this "front-page-itis", a disease that gives a very limited, establishment view of the world. Those who then also rely on official records thus tend to write establishment histories, which present an extremely distorted account of the battle.

By contrast, Reynolds News, with the slogan, "Government of the People, by the People, for the People" is a treasure house, a superb representation of left-wing views. As such, it conveys its own distortions but is probably more representative of what the bulk of people were thinking - and hugely influential as well. Time and time again, the paper has set the agenda, invoking responses in the War Cabinet and other newspapers.

Especially for Witterings from Witney, we have an extract from a delightful opinion piece by professor A Berriedale Keith (a well-known constitutional lawyer of his time), written on 21 July 1940. This column was on the theme, "Battle for Ideas", headlined, "Let Public Opinion Have its Say".

The Prof was writing about the utility of opinion polls (then very novel), telling us that, of MPs: "... we have long outlived the idea that at an electoral contest we confer unlimited authority on the member we elect", then going on to say that: "It is the business of an MP to keep in touch with public opinion, and not humbly to obey the bidding of the whips".

This, and other such delights, I shall feed into an updated version of this blog, the detail standing to confirm and strengthen the thesis offered in the book, that the Battle of Britain was part of the People's War, and won by the fortitude of the people as a whole.

The paper defined the battle on 15 September 1940, seven days into the Blitz of London - on which anniversary we now celebrate Battle of Britain Day: "Göring's 'blitzkrieg' on London", it said, "has a dual object: first to smash communications and disorganise public services in the Capital, and second to confront the Government with the problem of a demoralised and panic-stricken population".

In this, the paper wrote, Göring failed, then declaring: "The story of the bombardment of London is the story of the people's success", adding: "What stands out is the heroism and quickness and common humanity of the ordinary people ...".

This takes nothing from the bravery of the RAF pilots, and changes nothing in history - only our perception of it. The establishment has claimed the victory for its favoured elite, but it was the people's victory as well, in a continuous battle that ended not in October 1940 but went on until the following May 1941.