Dynamite on the Danube 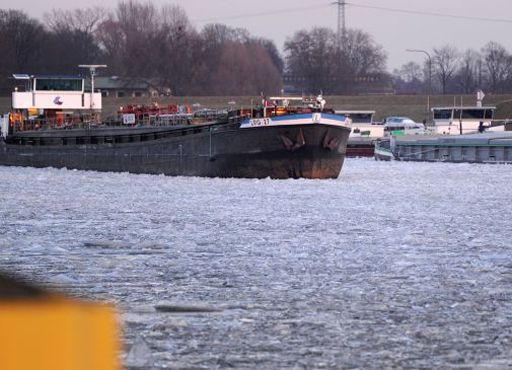 What might not be immediately obvious to the British, dependent as they are on road haulage as their primary mode for moving goods around the country, is the effect of the great European freeze on continental waterways, and in particular the Danube.

But, as the AP, via the Washington Post and AFP are reporting, European shippers are losing millions because a lengthy stretch of the Danube - one of Europe's key waterways - is stuck in the longest freeze in recent memory. The Danube flows for 1,785 miles through nine countries, starting in Germany's Black Forest, before passing through Austria, Slovakia, Hungary, Croatia, Serbia, Bulgaria, Romania, and Ukraine.

The river began to ice over in early February as temperatures plunged to minus 20°Celsius (-4 Fahrenheit). The freeze followed an autumn drought in which water levels had dropped so low that they were interfering with shipping along the international waterway.

By Friday, though, it was ice that had halted shipping on 440 miles of the Danube in Romania. The river forms the border between Romania and Bulgaria and six river crossings were also closed due to the ice. Upstream, the river was also iced over in parts in the Serbian capital of Belgrade.

Costache Constantin, manager of Europolis Shipping & Trading shipping company, said he'd never seen such a drawn-out freeze on the Danube since he began working in the industry in 1981. "This is costing millions of euros", he added. "The transportation of raw materials, coal, minerals, cereals ... are all affected, construction materials too".

An official from the Serbian economy ministry said the commercial repercussions "could be very bad", while infrastructure ministry official Pavle Galico said shipping would not resume for 10 days. Bulgarian authorities, who have banned all navigation on the river, reported 224 vessels stuck in ports, and Ukrainian rescuers in Croatia reached three crew members on a ship trapped in the ice since Friday.

As a result of the conditions generally, we have already seen a statement by Siim Kallas, EU transport commissioner, but it is too soon for the "colleagues" to take on board the most recent effects of the freeze which, so far, is said to have killed 460 people.

It is instructive though that, in 2003, shortly after the heat wave which caused so much grief in France, the EU parliament was right there, on 2 September, tabling a resolution "on the effects of the summer heat wave".

It interpreted the recent extreme weather conditions "as further evidence of the negative effects of climate change" which underlined "that these extreme weather conditions are another sign of the need for ambitious world action to halt climate change". Thus were the MEPs asked to consider that the EU "should continue to play a leading role in this process and reinforce its efforts in the key fields of environment, energy, transport, etc".

Now, as the cold sweeps Europe, we learn that the self-same Europe "stands ready to respond to severe weather conditions across the continent". But, we wonder, whether the EU parliament will be quite so quick to interpret these extreme weather conditions "as further evidence of the negative effects of climate change".

Now they will have to consider the "evidence" of the "Blue Danube", commemorated by Johann Strauss with a waltz of the same name. Rather than strains of music, what is being heard now is the boom of dynamite, which is being used to blow apart ice floes in a desperate attempt to prevent catastrophic flooding when the expected thaw comes.

Somehow, I think the MEPs might be more circumspect this time – although, as we all know, stupidity knows no frontiers and, like Monbiot, they may still try to argue that warmer means colder.