Dialogue of the deaf 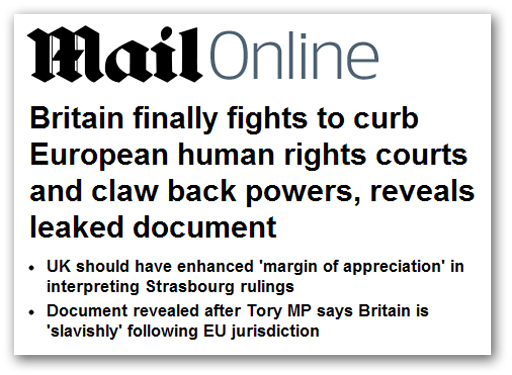 It doesn't matter how many times the error is pointed out - Mail journalists, it seems, are determined to parade their ignorance, confusing the Council of Europe with the EU.

Not only is the confusion sown in the headline, but we also see the caption to the picture of the ECHR in Strasbourg stating: "A leaked document says Britain should be given enhanced 'margin of appreciation' in interpreting EU rulings".

It might not be so bad if the paper could actually copy out stories properly, as this one is filched from The Guardian, which perfectly correctly refers to the Council of Europe, even in its headline. There is no mention of the EU anywhere in the report.

Apart from illustrating its unreliability though, the Mail is demonstrating that it simply doesn't listen to anything but itself. This is the archetypal top-down MSM, engaging in a one-way "conversation" with its readers. No wonder people turn to social media, which – despite the obvious deficiencies – is a two-way process.