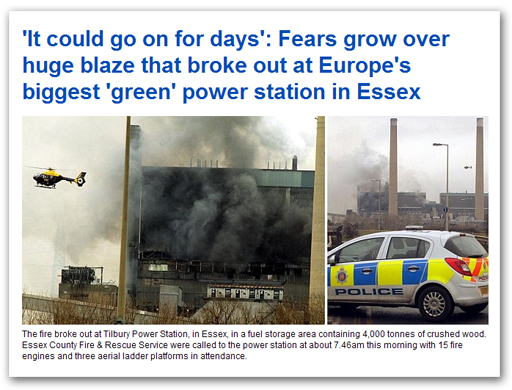 Although the Daily Mail does the Tibury power plant fire big, the one thing it does not mention is spontaneous combustion.

Opened in 1969, Tilbury previously operated as a coal-fired power station but has been converted to generate power from 100 percent sustainable biomass until its scheduled closure at the end of 2015. Now on fire, the seat was reported to be 4-6,000 tons of biomass in a wood pellet hopper high up in the power station building.

It is left to Bloomberg to raise the prospect of spontaneous combustion, as this is the most likely cause of the fire. The agency cites Claire Curry, a bioenergy analyst at Bloomberg New Energy Finance. She says: "If biomass is stored in large volumes, with little aeration, it is very likely to catch fire as it can get very hot. Normally biomass plants will pass streams of cool air through the biomass to avoid fires happening".

So hazardous are large quantities of stored biomass that it is a reasonable proposition to argue that no large plant is likely to run through to its end of expected life without a serious fire.

Yet the UK is seeking to get 15 percent of its energy from renewable sources by 2020, of which DECC estimates as much as half of that may be generated from biomass. And so popular is the option that burning of wood and wood waste for energy in the UK rose eight percent to 648,000 tons of oil equivalent in 2010 from 598,000 tons in 2009.

The trouble is though that, as the Tilbury fire has demonstrated, the process is anything but sustainable. It seems we have a case here of unsustainable combustion, and yet another black mark for the greenies.